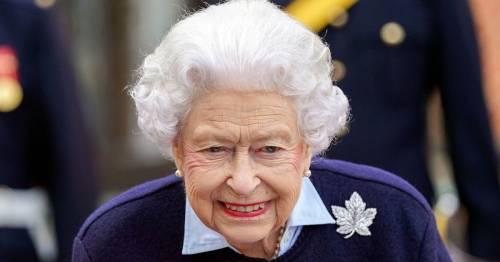 The Queen's giant 20-foot Christmas tree has been unveiled and is open for visitors to see from today.

The magnificent tree is on display at the grand St George's Hall in Windsor Castle.

The State Apartments of the historic Berkshire royal residence have been transformed and decorated with shimmering Christmas trees, twinkling lights and festive garlands.

For the first time, visitors can see intricate outfits made for a teenage Princess Elizabeth and her sister Princess Margaret when they took to the stage in an Old Mother Red Riding Boots pantomime.

A young Elizabeth wore a long-sleeved pink satin and lace dress to play Lady Christina Sherwood for the production in December 1944 during the Second World War when she was 18.

She also wore a chintz shirt, trousers and sun hat for a seaside scene, in which Margaret wore a blue dress overlaid with cream-coloured lace and cream lace bloomers to play The Honourable Lucinda Fairfax.

The costumes are on show in the castle’s Waterloo Chamber, which is the same room where the pantomimes were originally performed.

The shows were performed for audiences between 300 and 600 people..

Specially discounted seats were offered to members of the armed forces and dress rehearsals were attended by staff of the Ministry of Works and Planning who assisted with the technical arrangements for each production.

The royal siblings were closely involved in every aspect of the arrangements and acted alongside children from the Windsor Castle community and the school.

Caroline de Guitaut, the curator of the displays, said: “The idea that here we are 80 years on from when these very special occasions took place, it’s just a lovely thing to celebrate at this festive time of year and remembering the spirit in which these pantomimes were originally put together to bring cheer and a little bit of light relief to life in what was a very dark time.”

She said Princess Elizabeth played Lady Christina, because, given her age, it was thought it was more appropriate for her to play a female lead rather than a male one.

Ms de Guitaut said: "There was sort of a tradition actually for women quite often to play male leads in pantomimes. We can take that from our own experience of going to pantomimes as children.

“Princess Elizabeth did play the male lead, so we have for example her costume from the role of Aladdin, taking the lead character in that.

“But by the time of 1944, the final pantomime, which was Old Mother Red Riding Boots, Her Majesty was 18 years old and I think the feeling was that it would be more appropriate for her to play a female lead instead of a male lead by that stage”.

Ms de Guitaut said: “It certainly feels like a very unique moment in the Queen’s life and certainly in the life of the castle during that very interesting period of the Second World War.”

The castle’s Semi-State Rooms are now open to visitors for the winter months and feature a Christmas tree in the Crimson Drawing Room.

Families can also enjoy drop-in festive storytelling sessions on December 4, 11, 18, 20 and 23 in the state apartments.

Great Kitchen Tours will run from December 30 to January 9, giving visitors access to the oldest working kitchen in the country, which is not usually open to the public.

Built in the reign of Edward III, the Great Kitchen has remained in use for more than 750 years and is still used today for state occasions hosted by the Queen.