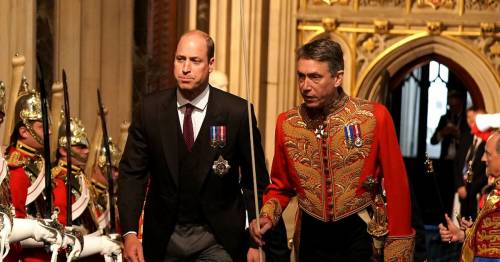 Queen preparing William for kingship amid Sussex drama as she trusts him, says expert

Prince William is becoming one of the Queen's most "trusted lieutenants" as he steps up his royal duties, a royal expert has said.

Today, he attended the State Opening of Parliament for the first time ever, accompanying his father Prince Charles and his wife Camilla.

It had been announced just last night that William would be attending the ceremony after t he Queen reluctantly pulled out on the advice of royal doctors due to her continued mobility problems.

During the event, William took his place in the procession behind the Imperial State Crown and sat at the side of Charles, who had the responsibility to read the Queen's speech.

William walks past the Household Cavalry in the Houses of Parliament
(

And for the Mirror's royal editor Russell Myers, it shows how William is being primed already to be a future king and is learning the ropes with his dad.

He said: "William is emerging as a trusted lieutenant of the Queen, especially over the last couple of years.

"With the ongoing Sussex saga and the tawdry scandal surrounding his uncle Prince Andrew, William has been involved in top-level conversations regarding their futures, so it shows it is not just Charles but William also being prepared for kingship.

"Charles has often been realistic in accepting his reign most likely will be short-lived in comparable terms.

"He is fully supportive of William being his understudy and learning the ropes with him in order to shore up all of their futures."

Prince William and his wife Kate with the Queen
(

In this instance, it enables Charles and William to jointly exercise that function. No other functions have been delegated by the Queen.

And according to Russell, seeing Charles and William carry out the State Opening of Parliament was "history unfolding before our very eyes".

He added: "It is an unprecedented and unparalleled event and the significance of the decision by the Queen cannot be underestimated. We are seeing history unfolding before our very eyes.

"We may be stopping short of a regency but it is clear both Charles and William are trusted by the Queen and will be handed more responsibility and become more front-facing in order to prepare them both and the nation for a smooth transition when the Queen is no longer here.

"The significance of Charles stepping in lies in the fact that before today he has never had a speaking role at the State Opening of Parliament. Although he made the speech, the words did not come from him but from his mother.

"Even still, we are creeping into a whole new era for both the individuals and the monarchy at large."

Previous : Prince William and Kate Middleton are ‘better option’ for Adelaide Cottage, says expert
Next : Ashley Cole breaks down in tears as he recalls gang threatening to “cut his fingers off”