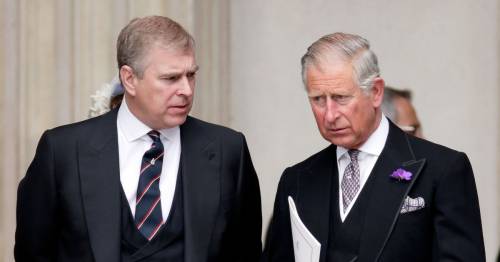 Prince Andrew once had to be ordered down by the Queen in a "bizarre" squabble with older brother Charles over a toilet, it has been claimed.

The Duke of York, aged 39 at the time of the alleged incident, refused to remove his toiletries from a royal bathroom at Sandringham meant for the Prince of Wales and future king.

He finally relented when his mum intervened, according to an ex-maid.

Former Buckingham Palace staff member Janette McGowan – who had travelled with the Firm to the residence in Norfolk – revealed Andrew's childish tantrum, said to have happened over Christmas 1999.

She said astonished colleagues were alerted to the situation after the Duke put his things into the wrong bathroom and then refused to move them.

Charles would have been 51 at the time.

Ms McGowan told The Sun : "We were told not to move anything and not to touch anything in that bathroom because there was an 'ongoing situation'."

She explained that when members of the family travel to Sandringham – where the monarch usually hosts her annual festive lunches – they are each allocated rooms and bathrooms.

But on this occasion Andrew took the wrong one and "wouldn't budge", the former maid continued, adding: "It turned into a bizarre stand-off."

Prince Andrew has been accused of behaving like a 'spoilt brat'
(

"In the end, the Queen herself had to intervene to defuse the situation. She actually had to have words with Andrew and say to him that he had to use the other bathroom and that was when he finally backed down.

"He was almost 40 at the time. It was very odd behaviour for someone of that age."

She added, in contrast, Prince Charles was "very grown-up about it" and simply waited for the Queen to step in.

Ms McGowan, 65, worked at the Palace from 1999 to 2000, and said the strangest thing was there was "nothing special" about the bathroom, but rather Andrew seemed to resent Charles being regarded as "superior".

He arrived first and put his toiletries in a bathroom that wasn't opposite his bedroom, she said.

It comes after another former maid said she had no regrets in speaking out against Andrew who she described as a "horrible man".

Charlotte Briggs claimed the Duke of York often erupted into "demanding and entitled" foul-mouthed rants which left her in tears.

The 47-year-old, who lives in Halifax, West Yorkshire, made front-page news this week when she revealed her experiences doing the job "nobody wanted" six months after starting work for the royals in January 1996.

She described the Queen's second son as a "spoiled brat" who once allegedly – after noticing she'd left a gap in the curtains – fumed: "Can’t you f***ing do anything right?"

Charlotte says since then she has been ridiculed in her hometown and accused of selling out.

But believes she is "entitled to speak about what happened to me even though it was years ago".


Charlotte has also been keen to point out while she considered Prince Andrew's attitude poor, she never witnessed any inappropriate behaviour.

The Duke is facing a civil trial after being accused of sexual abuse by a trafficking victim of his late paedophile pal billionaire financier Jeffrey Epstein.

Virginia Giuffre is suing Andrew for allegedly having sex with her in the US when she was 17.

He vehemently denies all allegations and has not been charged with any criminal offence.

Previous : A drug company says a Toronto condo project would threaten ‘national security.’ Here’s why
Next : Brit woman still waiting to speak to parents after tsunami leaves Tonga cut off