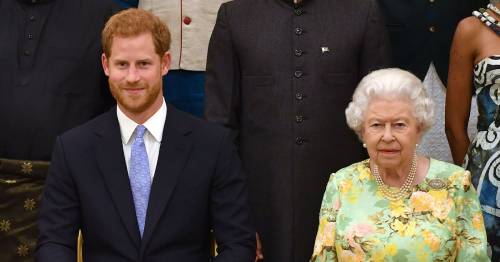 Queen ‘anxious’ as she prepares for Prince Harry’s ‘most shocking claim yet’, says expert

The next 12 months are set to be extremely busy for the royals – not least as the Queen will be celebrating her Platinum Jubilee.

And 2022 is set to prove a pivotal year for Prince Harry, who will release his tell-all book this year.

When it was revealed he would be publishing a book, it reportedly sparked a "tsunami of fear" among the royals.

A release date has yet to be announced and it has not been confirmed exactly what will be in the book.

However, it has been speculated that he could talk about the relationship between him and his father Prince Charles and brother Prince William, how he quit the royal family and the so-called "royal racist" after he and wife Meghan Markle claimed that Harry had "conversations" within the royal household about how dark son Archie's skin might have been before he was born.

Prince Harry' s new memoir could cause further tension amongst the royal family, it has been claimed
(

And according to royal expert Katie Nicholl, Harry and Meghan could be planning to make more bombshell claims in the build-up to the book's release.

She told Closer magazine : "The book will no doubt be full of more intimate and shocking revelations – Harry wouldn’t have got a multi-million-pound advance without promising some juicy details.

"And in the build-up to that, I imagine Harry and Meghan will have a carefully thought out publicity drive, which will see them drip-feed teasers in the months building up to the release. There’ll be more shocking claims to come, perhaps their biggest yet!

"I’m sure the Queen has a lot of anxiety over that and the royals will be braced for more bombshells.”

When announcing the book last year, Harry promised it would be a "truthful and wholly accurate" account of his life.

In a statement confirming the book, he said: "I'm writing this not as the prince I was born but as the man, I have become.

“I've worn many hats over the years, both literally and figuratively, and my hope is that in telling my story – the highs and lows, the mistakes, the lessons learned – I can help show that no matter where we come from, we have more in common than we think."

Meanwhile a blurb from publisher Penguin Random House read: “Covering his lifetime in the public eye from childhood to the present day, including his dedication to service, the military duty that twice took him to the frontlines of Afghanistan, and the joy he has found in being a husband and father, Prince Harry will offer an honest and captivating personal portrait, on that shows readers that behind everything they think they know lies an inspiring, courageous and uplifting human story."

Previous : ‘I watched my brother’s final moments on FaceTime – No10 party makes me sick’
Next : Thor Bjornsson at lightest weight since he was 10 ahead of Eddie Hall fight