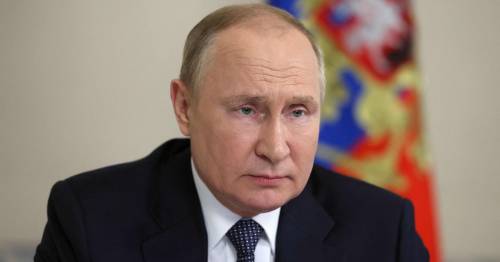 Foreign Secretary Liz Truss has accused Russia of "weaponising hunger" and using food security as a "callous tool of war" with its blockade of Ukrainian grain.

Ukraine has been described as the "bread basket of Europe" and was one of the world's largest exporters of wheat, corn and sunflower oil.

But the Russian invasion and Moscow's sea mining to prevent access to the southern ports, including Odessa, has halted much of the flow and jeopardised world food supplies.

Speaking at a press conference alongside Turkish foreign minister Mevlut Cavusoglu in Ankara, Ms Truss warned of "devastating consequences" unless “urgent action is taken within the next month ahead of the new harvest”.

Accusing Vladimir Putin of "weaponising hunger" with the blockade, she added: "He is using food security as a callous tool of war.

“He has blocked Ukrainian ports, and is stopping 20 million tonnes of grain being exported across the globe, holding the world to ransom.”

NATO leaders are expected to discuss how grain exports can leave the war-torn country when they meet for a crunch summit in Madrid next week.

Meanwhile, western officials told reporters there was an "unprecedented scale of global food insecurity" which was hitting the poorest nations hardest and that "will only get better once the war is over".

“Even at the best of times, if tomorrow the war was over, we are still looking at a two year crisis globally,” one official said, adding global food insecurity could last for years after the conflict ends.

They said that while figures were "changing very quickly" there were 1.6 billion people in food insecurity as a result of the blockade, with 49 million expected to be struck by famine and life-threatening situations.

“There is still going to be an impact on the world’s food supply from Ukraine for an extended period as a result of the war and as long as the war continues,” another added.

It comes after Margarita Simonyan, editor-in-chief of the news channel RT, welcomed the prospect of a global famine caused by the grain blockade.

Speaking at the St Petersburg International Economic Forum (SPIEF), the media chief said she'd heard several Russians say that "all our hope is in the famine".

"Here is what it means," she said. "It means that the famine will start now and they will lift the sanctions and be friends with us, because they will realise it's necessary."