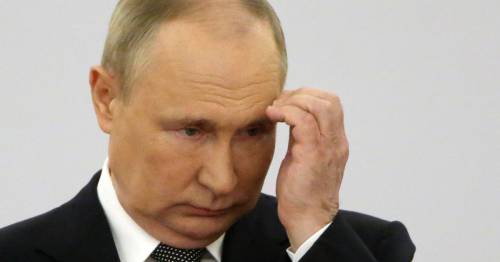 The head of the UK’s armed forces says Russia has already “strategically lost” the war in Ukraine and is now a “more diminished power”.

While Russia may achieve “tactical successes” in the coming weeks, he said any notion that the war had been a success was “nonsense”.

Admiral Radakin, who is the UK’s chief of defence staff, said Russia was running out of troops and advanced missiles and would never be able to take over all of Ukraine.

Admiral Radakin spoke to the PA news agency as he visited Scotland on Wednesday, where he met soldiers at Edinburgh Castle.

He said: “This is a dreadful mistake by Russia. Russia will never take control of Ukraine.

“Russia has strategically lost already. NATO is stronger, Finland and Sweden are looking to join.”

He said Russia had been forced to give up its objectives of taking over most Ukrainian cities and was now engaged in a tactical battle where fighting is “tough”.

Admiral Radakin said: “The Russian machine is grinding away, and it’s gaining a couple of – two, three, five – kilometres every day.

“And that’s tough for Ukraine, but this is going to be a long fight. And we’re supporting Ukraine, Ukraine has shown how courageous it really is.

He continued: “President Putin has used about 25% of his army’s power to gain a tiny amount of territory and 50,000 people either dead or injured.”

Russia is now a “more diminished power” diplomatically and economically than several months ago, he said.

The chief of defence staff continued: “Any notion that this is a success for Russia is nonsense. Russia is failing.

“It might be getting some tactical successes over the last few weeks. And those might continue for the next few weeks.

“But Russia is losing strategically.”

Admiral Radakin said he was in touch with his Ukrainian counterpart, General Valerii Zaluzhnyi, who recognised that they were in a “tough battle” in the east.

“They’re ingenious people in terms of how they’re taking the fight to the Russians.

“But they’re also honest people, with saying actually they need some help.”

He said the UK would continue its support for Ukraine and “we’re in this for the long haul”.

Admiral Radakin said he was “wary” of phrases like parity as no single capability would determine the outcome of the war.

The UK is providing MLRS rocket systems and has just delivered 120 armoured fighting vehicles, he said.

He said: “We’ve been providing anti-tank weapons, there are other elements that we’re providing and that will continue.

“But it’s the mass that’s provided by the whole of the international community – and it’s putting that alongside the courage and the resolve of the Ukrainian armed forces to fight for their territory.