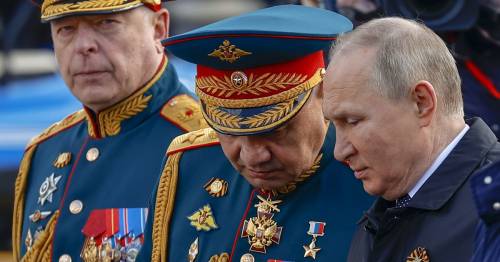 Kremlin forces invaded Ukraine in February because the Russian President wanted to push the Western military alliance back from his country’s borders.

But the war has instead led to its neighbour Finland, with which it shares an 810-mile border, saying it wants the protection of the 30-member, nuclear-armed coalition.

“We hope that the national steps still needed to make this decision will be taken rapidly within the next few days."

A formal application is expected within days and NATO leaders are expected to discuss the bid at their summit in Madrid next month.

Sweden, which shares a maritime frontier with Russia, is also set to apply to join the organisation.

Sweden's parliament will reportedly debate the security situation on Monday and Prime Minister Magdalena Andersson will call a special cabinet to sign it off.

NATO Secretary-General Jens Stoltenberg previously said it would be possible to allow Finland and Sweden to join "quite quickly".

Russia said Finland's decision was a hostile move that "definitely" posed a threat to its security.

Kremlin spokesman Dmitry Peskov said the steps taken by Finland to join NATO were a cause for regret and a reason to impose a symmetrical response.

Asked whether this presented a threat to Russia, Peskov said: "Definitely. NATO expansion does not make our continent more stable and secure."

He added Finland had joined "unfriendly steps" against Russia.

The unity of allied nations shows “democratic countries are further joining together as a direct consequence of Putin’s illegal invasion” and “demonstrates the futility of the action he has taken”, the PM’s spokesman said.

No10 said the Kremlin’s claims that Finland joining NATO would be a threat to Russia were “clearly not true”.

Boris Johnson’s spokesman added: “At no point have we seen any increased threat to Russia. The action taken by Nato is defensive by its very nature.

“The only aggression that was actually enacted was the illegal invasion.”

It comes after Boris Johnson said Britain’s Army could come to the aid of Sweden or Finland if Russia attacks the countries for applying to join Nato.

The Prime Minister visited the two countries on Wednesday to sign security partnerships which will share intelligence on military exercises and technology.

Asked if it could mean British boots on the ground, Mr Johnson replied: “In the event of a disaster or an attack on either of us, then yes we will come to each others’ assistance – including with military assistance.

“The nature of that assistance will of course depend on the request of the other party.”

The potential move raised fears of retaliation by Moscow before Sweden and Finland formally join and enjoys the protection of NATO’s Article V collective defence clause, which states that an attack on one member is an attack on all.

Sergiy Kyslytsya, the country’s Permanent Representative to the United Nations, told LBC Radio’s Tonight with Andrew Marr: “President Putin acts by his own choice, he hardly listens to his advisors… So it is very difficult indeed to say whether he may or may not order to use tactical nuclear weapons.

“Some people hope that not everyone around him is crazy as he is and even if he orders to use tactical nuclear weapons, they may be sabotaged by the chain of command. It’s very difficult to say.

“But if it happens, the retaliation by the West, I understand, will be very rapid and very harsh.”

Previous : Boris Johnson says ‘of course’ he’ll give more help for your bills – in a few months
Next : Family’s anguish as e-scooter rider dies after crashing into lamppost without helmet