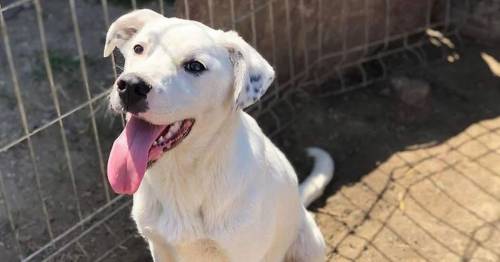 There's nothing more rewarding than adopting an animal in need – especially when you're able to provide them with a 'dream life'.

Four puppies have begun their search for new homes in the UK after being taken in by Barking Mad Dog Rescue, an animal charity who work to rescue Romania's unwanted dogs.

All from different litters, the puppies were originally picked up from the streets by a 'dog hoarder', who wasn't able to provide them with the care and attention they needed.

Admitting he needed help, he dropped them off at Barking Mad Dog Rescue.

Founder Hilary Anderson said: "This man has brought many dogs to our shelter over the years. He is known locally as an animal hoarder and cares deeply for dogs, although he doesn’t always know how to do best by them."

Ranging between five and eight-months-old, the puppies still have a lot to learn about the world around them – and all need help with their ongoing training, socialisation and development.

Summing up the puppies, Hilary described them as "sweet and friendly" dogs who would benefit from living alongside another animal in the home.

She added: "As with all of our dogs, rescue experience is a must for their new homes.

"They would love to find a home with a friendly adult dog to learn from, but equally could be an only dog as long as they have plenty of opportunities to socialise and play."

Barking Mad Dog Rescue has been working to rehome Romanian kill shelter dogs to the UK since 2013.

The rescue has rehomed more than 1,000 dogs and continues to feed about 650 dogs every single day across their shelters.

She said: “Pixie lived in a park in Bucharest, with her mum, brother and six other dogs. They were fed, vaccinated and neutered by a woman who wanted to help the park strays.

“The pack survived the best way they could. Winters were harsh. Their guardian built them a kennel and locals smashed it to pieces.”

But their lives changed in 2013 when new laws came in ordering strays to be rounded up and killed.

“Pixie, like many others, found herself in a privately-owned shelter. Although safe from the dog catchers, Pixie had lost everything else – her freedom and her life. She stopped eating and couldn’t get used to life behind bars.

”In desperation, the woman who had cared for Pixie in the park posted her on Facebook asking for someone to take her away from Romania and give her the home she deserved.”

Hilary answered this plea and ended up adopting Pixie alongside two other dogs, Elsa and Kirsty, before starting up her own rescue.

The Barking Mad Dog Rescue team now return to Romania every two months to visit their own shelters in Constanta.

If you're interested in rehoming Billy, Tommy, Liza or Mabel, or any other dogs under Barking Mad Dog Rescue's care, submit an application through their website www.barkingmaddogrescue.co.uk.

Do you have a story to sell? Email paige.freshwater@reachplc.com.

Previous : Monkeypox cases soar 38% with 219 new infections – check cases in your area
Next : Woman, 23, lived in council flat when she met millionaire partner 33 years her senior