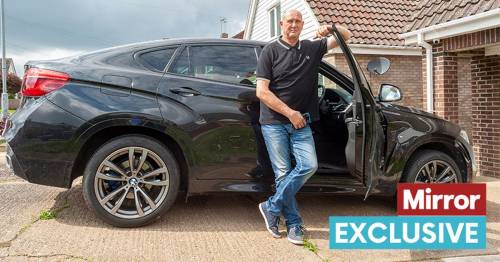 Punter who sued bookies after winning £1.7m plans £25,000 man cave in his garden

A gambler who bookies were ordered to pay a £2.4million jackpot is finally splashing out on a £25,000 dream “man cave” and BBQ.

Andy Green, 55, won £1.7m in January 2018 in an online blackjack game but was told by Betfred that a software glitch made his win invalid.

After a three-year High Court battle he was last year awarded the winnings – which rose to £2.4m after interest.

Now the triple heart-attack survivor has revealed how he has been given planning permission to build a “man cave” at the bottom of the garden at his £300,000 detached home.

Dad-of-two Andy said: “I reckon the man cave will cost about £25,000. I’m still just trying to find a builder.

“It’ll be small with a six-metre covered section where I can BBQ and put chairs underneath.

“I just want to go in there and watch my F1 and my GP motorbike racing without my daughters moaning at me that I’m hogging the TV.”

Andy, dad to Natasha, 22, and Abbie, 18, has been careful with the money, only buying new windows for his home and a second-hand BMW X6 with 18,000 miles on the clock.

He is also planning a trip to Lesbos, Greece, to see pals he has not seen for more than a decade.

Andy, of Washingborough, Lincs, said: “I haven’t been able to go in 12 years. I still chat to my friends in Greece but I haven’t told them about the win.”

He also revealed he had spoken to TV bosses about dramatising his legal fight. He said: “People have said to me, ‘You’ve made companies like Betfred think twice about taking advantage again’.

“I’ve been contacted about a short film or a series. I was told I’d get royalties but I just want the story out there.”

A High Court judge ruled for Andy and told the bookies to pay up.

Previous : Ava White murder suspect ‘kept smiling at her’ and called her ‘cheeky’ before stabbing
Next : Clarence Dixon: Blind man executed for murder of student after 14 years on death row