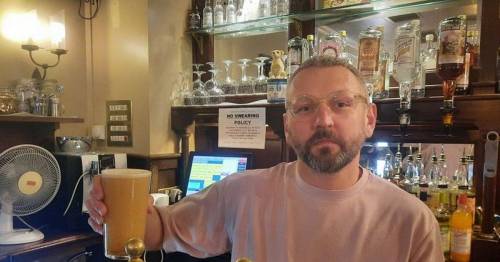 A city centre pub landlord has lifted the lid on some of the most shocking things he has seen – including people having sex outside.

Dan Hazelgrave, who runs The Angel Inn in one of Leeds' 'loins', is calling for for the famous passageways to be gated to stop anti-social behaviour.

He says homeless people use them as a public toilet after opening hours, and fights can break out.

The ‘loins’ of the city centre are passageways with yards between high streets Briggate and Lands Lane, where a range of venues are located.

Dan, 43, has been running the well-known Sam Smith’s boozer for 19 years, reports LeedsLive.

The landlord, originally from Lower Wortley, lives above the pub with his two teenage children, who are 15 and 16.

"I’ve had a false leg left in the pub before and someone come back for it.”

Speaking about the moment he caught a couple having sex, Dan said: “It was right outside in the middle of the yard, I got woken up by it – it’s not a pleasant sight.

"They were teenagers or early 20s. I didn’t say anything, I just shut my window and went back to bed.

“The problem with these loins of Leeds, they should be gated off on a night-time but Leeds City Council won’t entertain it because they feel it’s a public thoroughfare.

"But people that come up these yards on an evening, after close, come and do some things illegal or wrong.

"I’ve spoken to them about it previously but now with everything that’s going on with the homeless people, it needs a little bit more [action].”

Dan added he’s had issues with homeless people sleeping in the pub garden and “making a mess and using it as a public toilet”.

She said the current situation was "dreadful" with poo and wee being found in their yard each night.

Charlie said: "I have the same issues [as Dan]. Every day we are having to get the rangers in to clean everything up.

"We've had issues with excrement and people passing water. There's also needles and packets, it is just dreadful, it's really tiring.

"When everyone is closed, it becomes a dumping ground."

A spokesperson for Leeds City Council said: “We are sorry to hear of the alarm and distress caused by the behaviour reported in the loins near the Angel Inn.

"There is a legal process the council has to follow to alter public rights of way and we would welcome contact from Mr Hazelgrave and anyone else affected about this.

"If there are any criminal offences being committed then this should be reported to the Police via 101 or 999 if it is an emergency.”

West Yorkshire Police Inspector Jon McNiff, who heads the City Neighbourhood Policing Team, said: “We have regular contact with licensees and businesses in the city centre’s night-time economy, and work closely with them alongside our partner agencies to tackle crime and anti-social behaviour.

“We target our patrols and problem-solving activities at any identified hotspots, and always encourage businesses and residents to report any issues so we can focus our resources where they are needed most.

“We have well-established partnership arrangements in place, which includes liaising with the Street Support Team and Leeds Anti-Social Behaviour Team, and will continue to use all available measures to keep the city centre as safe as possible.”

Previous : Haunting CCTV of boy, 6, crying with duvet before being ‘killed by own dad and stepmum’
Next : France to take steps against online retail site Wish to protect consumers