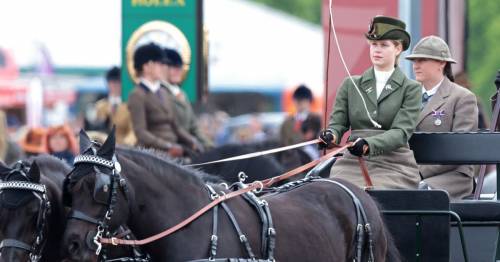 A proud Queen watched her youngest granddaughter lead a special horse parade in a carriage belonging to her late beloved husband Prince Philip.

Her late grandfather Prince Philip was a great lover of the sport, and taught Louise, who is now an accomplished carriage driver, everything she knows.

And watching the display from the main arena at the show alongside the Queen were Louise's parents Prince Edward and Sophie Wessex.

As Louise entered the arena, a big smile broke out on Her Majesty's face, while her mum Sophie appeared to take pictures and video on her mobile phone.

Louise is said to have been close to her late grandfather and sources also claim she is the Queen's "favourite" grandchild.

A royal source previously told The Sun: "The Queen loves the fact that Louise and James [Louise's younger brother] relish their time at Balmoral, and she has become particularly close to Louise, who seems to have become her favourite grandchild, closely followed by James."

Louise's appearance comes after the Queen was greeted with cheers and applause as she took her seat in the main arena at the Royal Windsor Horse Show today.

Her Majesty, who has been suffering from mobility issues, was seen walking slowly with the aid of a walking stick to her seat.

The monarch, who was dressed casually in a headscarf, was driven right into the arena before getting out of her car.

She was then seen taking a small lift up to the seat area before slowly making her way to her seat with her walking aid to the sounds of the cheering crowd.

Earlier today, she was pictured beaming as she turned up at the show in the passenger seat of her Range Rover to watch the action in the parade ring.

Wearing a white blouse and a blue cardigan-style top and sunglasses, Her Majesty spoke to a small group, thought to be officials from the show, through the open car window.

She appeared relaxed, smiling and laughing as she chatted, while just a few feet away dozens of photographers tried to capture the moment.

The monarch was last seen in public when she attended a service commemorating the life of her late husband, the Duke of Edinburgh, in March with senior royals and a congregation of hundreds.

Previous : Upbeat ad filmed in fire-ravaged Lytton, B.C., called ‘a slap in the face’ to residents
Next : Ava White told pal she could ‘batter’ boy, 14, accused of killing her, court hears