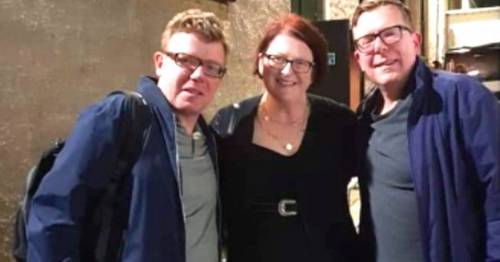 A Proclaimers superfan lost 13 stone after she was left shocked by a photo with her idols.

Nichola Maclean has been a fan of Craig and Charlie Reid since she was aged ten.

Her thrill at meeting the twin singers was diminished after she thought she looked 'huge' in a picture following a gig in Oban in 2018.

Nichola, who is 6 foot 3, was 'mortified' after her weight increased over the years.

The retail supervisor told the Daily Record : "By that point I weighed 27 stone and wore a size 24, I didn't realise before, but looking at the photo I knew I was huge.

"Because of my height, I thought maybe I hid it well.

"That photo was the wake-up call I needed to make a change."

The mum from Tyndrum, Perthshire started to pile on the pounds while working 70-hour weeks in a burger van.

Nichola says she was eating from the van on the go and rarely exercised after work.

As her weight began to climb she began to suffer from headaches and felt lethargic, before a doctor diagnosed her with dangerously high blood pressure.

Her brother-in-law Billy had died of an undiagnosed heart condition at just 52 and the health check scare forced her to take action.

Nichola continued: "I knew my health was precious and I had to do something."

Inspired by her favourite crooners, Nichola planned to walk 500 miles from Tyndrum to John O'Groats and back in a bid to lose weight and raise money for charity.

But to prepare for the lengthy hike she had to embark on a huge health kick.

She began eating healthy meals with smaller portions, cutting out takeaways and threw herself into a new fitness regime.

Nichola is now walking 500 miles from Tyndrum, Argyll to John O'Groats and back over the space of 3/4 weeks for charity
(

Nichola said: "Changing my diet and exercise basically meant I had to overhaul my entire life.

"It was emotionally and physically exhausting, a real battle. But it was a battle worth fighting."

She will now begin her 500-mile mission across Scotland this weekend by walking 20 miles per day over four weeks and plans to stay with friends along the way.

And she'll not be without support, with two very special among those backing Nichola to take down her mammoth effort – the Proclaimers themselves.

She added: "Craig and Charlie have been amazing.

"They let me use their song lyrics for the logo on our charity t-shirts. I held a whisky auction before setting off and they signed a couple of bottles.

Nichola Maclean with the famous twins Craig and Charlie Reid
(

"And of course I've been listening to their music along the way, my favourite song is Love Can Move Mountains.

"From that first photo with them to their unwavering support they really have inspired me."

She chose A.B.C.D in memory of her brother Billy while 500 Miles is also close to her heart.

Previous : He survived the Second World War, but this Nova Scotia airman never made it home
Next : Madeleine McCann snatched by accomplice who sold her to suspect, prosecutor suggests – World News