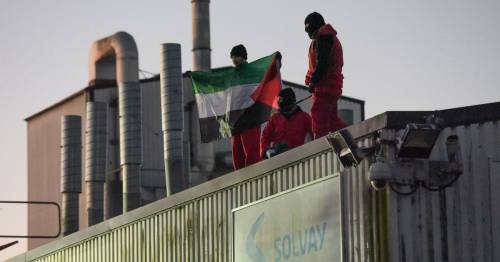 Palestine Action protesters have scaled the roof of a UK chemical factory in a protest against drone bomber production.

Campaigners climbed onto the roof of the Solvay factory on Wrexham Industrial Estate on Monday morning.

They scaled the building as part of a demonstration against the supply of materials for use in drones, they have said.

The group said they had also daubed red paint on the factory, "marking the company’s complicity in the murder of the Palestinian people."

They say that Solvay provides "materials and adhesives" to another company which sells drones to Israel.

Their claims have been put to Solvay.

A Watchkeeper drone produced in 2014
(

Photos from the scene show three figures standing on top of a building, two wearing balaclavas and one holding a Palestinian flag.

Palestine Action is supported by the Welsh Underground Network, which pushes for a socialist republic in Wales.

“The Welsh Underground Network applauds and supports all involved in the occupation of this factory," a spokesperson for the group said.

"Action like this is critical to ending the apartheid regime in occupied Palestine.

"We call on all comrades to come together to support this action and investigate similar businesses who support the Israeli regime to also take action against."

An industry supply chain document lists Solvay UK as a supplier to Ebit Hermes, which helps produce the Watchkeeper drone.

According to Army Technology, the "first flight of the Watchkeeper UAV was performed in April 2008, from Megido Airfield in northern Israel.

"In March 2014, the Watchkeeper UAV was deployed for its first operational flights in Afghanistan in support of the British Army’s operations in the area."

Palestine Action have said their mission is to shut Solvay down.

Previous : Baby diagnosed with a sprain had actually suffered a stroke
Next : Nan’s £14,000 caravan dream crushed as ‘company tries to buy it back – for just £2,000’