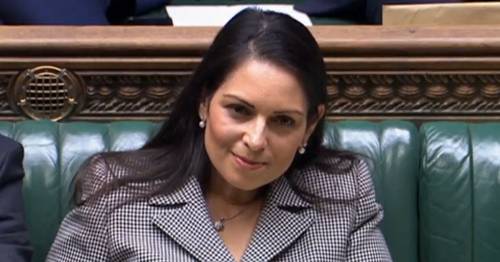 New battle lines were drawn over deportations to Rwanda today as the Home Office prepared for another attempted flight within weeks.

But the stubborn Cabinet Minister vowed to plough on with chartering planes costing taxpayers an estimated £500,000 for sorties that could be grounded by the courts.

Shadow Home Secretary Yvette Cooper branded the Rwanda policy "Government by gimmick" and a "shambles that is putting our country to shame".

The Labour frontbencher fumed: “This is unworkable, unethical and won't stop the criminal gangs.”
She accused Ms Patel splashing “half a million pounds chartering a plane she never expected to fly”.

There were fiery scenes in the Commons as MPs were updated on the fiasco that saw a handful of migrants spared removal just minutes before a Boeing 767-35D was due to take off from Boscombe Down military airfield in Wiltshire.

A fiasco saw a handful of migrants spared removal just minutes before a Boeing 767-35D was due to take off from Boscombe Down military airfield, pictured
(

The Mirror understands four were already on board and in their seats when they were told the flight was grounded just before 10pm.

Priti Patel’s team were today furiously trying to find out which of the European Court’s team of nearly 50 judges signed off the last-minute reprieve.

It’s understood the Home Office was given only two sides of A4 and were not told the name of the judge.

A Whitehall source said: “An unidentified, out-of-hours judge somewhere in Europe said it can’t go ahead. The letter just says ‘the duty judge’… We can’t work out what’s happened or how to remedy it.”

The source raised concerns about the anonymous process, saying: “There is a Russian on the court”. They added: “There is a possibility, a one in 46 chance.”

But the source played down speculation that the UK would withdraw from the European Convention on Human Rights.

They said: “The priority now will be getting to the judicial review stage – we think we can win that, get through that – and operationalise the policy.”

A Spanish-registered "Privilege Style" civilian aircraft Boeing 767 stands off on a Ministry of Defence runway to take the first migrants to the east African country from Amesbury, Wiltshire
(

One of the migrants who was due on the flight tonight claimed he was hit, kicked and pushed by security officers while in detention.

The 25-year-old Iraqi, who was held at Colnbrook House immigration removal centre awaiting deportation, told Sky News guards working for private company Miti entered his holding room and took him by his hands and feet.

"It was four of them, two of them take my hands, others take my feet and one of them grabbed my head," he said.

"They hit us, kick us and they push us through doors."

Mitie told Sky "restraint is only used as a last resort" for the safety of staff and those travelling.

It added: "This includes the prevention of injury or self-harm.

“Our focus is on treating the people in our care with dignity and respect, and we are confident that our officers have acted professionally.”

Originally 130 migrants were set to be on the Privilege Style jet to east Africa on Tuesday – a number that dwindled to just seven by Tuesday morning.

The figure was dwarfed by the number of migrants who successfully crossed the Dover Strait – the world’s busiest shipping lane – in small boats and arrived on British shores on the same day.

But the flight was scrapped after an 11th-hour legal ruling by the European Court of Human Rights.

Ms Patel told MPs: "This Government will not be deterred from doing the right thing.

“We will not be put off by the inevitable legal last-minute challenges.”

A Whitehall source revealed a new deportation flight could take off for Kigali within weeks – before a key ruling over the policy.

Human rights lawyer Frances Swaine, who represents a man facing deportation to Rwanda, urged the Government to wait until a judicial review ruling due next month before attempting another flight.

"The European Court of Human Rights has recommended that there are no other flight proposals put together until the substantial judicial review hearing into the whole policy is heard,” she said.

"We're expecting that that would take place in about six weeks time during July.”
She added: “Wait until we have the decision.”

But the Whitehall source hit back: “There’s nothing in the European Court letter that says you can’t continue to operate a flight.”

Notices warning Channel migrants of their impending removal are due to be sent before the end of the month.

The source indicated that more asylum seekers would be told they were being removed than there were seats on the plane because the Government was braced for courts to block more deportations.

Meanwhile, No10 repeatedly refused to rule out quitting the Strasbourg-based ECHR after it stopped Tuesday’s flight.

Tory MPs called for the UK to quit the court.

Daniel Kawczynski told the Commons: “It is now time to consider leaving the European convention on human rights.”

Greg Smith called on the Government to bring forward its promised UK Bill of Rights and "remove all power of the European Court of Human Rights over our sovereign decisions".

Boris Johnson ’s spokesman said the Government would do "whatever it takes" to ensure flights to Rwanda go ahead.

Asked if the Government could withdraw from the ECHR, he added: "We are keeping all options on the table including any further legal reforms that may be necessary.

"We will look at all of the legislation and processes in this round."

But the Whitehall source said: “The priority now will be getting to the judicial review stage – we think we can win that, get through that – and operationalise the policy.”

Mr Johnson sparked fresh anger at Prime Minister’s Questions by accusing Labour of being "on the side of the people-traffickers who would risk people's lives at sea".

Labour’s Yasmin Qureshi said: “I think that should be taken out of the record.”

Previous : Most tattooed man on Earth unrecognisable in unearthed photo before whole body inked – World News
Next : ‘Tories did not try to prevent rail strike as they want to inflame political divisions’ – Voice of the Mirror