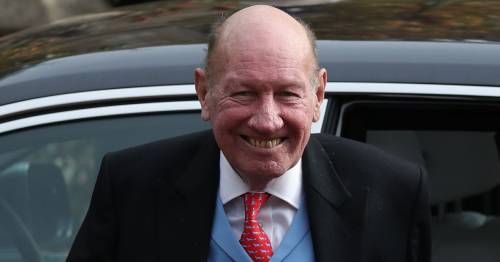 Princess Eugenie's father-in-law died days before her son's christening, according to reports.

George Brooksbank, 72, passed away last week, according to MailOnline.

He had suffered from Covid last year and had been unwell for some time, according to the publication.

Eugenie and husband Jack Brooksbank baptised their son August on Sunday, at All Saints Chapel in Great Windsor Park.

Zara and Mike Tindall's son Lucas was also christened at the ceremony, which was attended by the Queen.

A royal insider reportedly said: "George had been in hospital with Covid and had not been the same after that.

"He had been unwell for some time."

Princess Eugenie and Jack Brooksbank arrive at the christening
(

Mr Brooksbank's cause of death has not been confirmed.

A retired chartered accountant and company director, he is said to have split his time with wife Nicola, 68, between London and France.

Buckingham Palace declined to comment on news of the death.

August, born in February, was meant to be christened in July before the event was cancelled due to the pandemic.

He is the first grandchild for Prince Andrew, 61, and Sarah, Duchess of York, 62.

He is also the ninth great-grandchild for the Queen, 95.

The monarch attended the ceremony on Sunday after she pulled out of a string of public events in recent weeks.

It had been reported that she was to make a decision on the day, having consulted her personal doctor.

Pictures then showed her being ferried away from the Berkshire chapel, with a lime green hat in view.

Sign up for our newsletter to keep up to date with all the essential information and changes at www.mirror.co.uk/email.

The christening was led by Canon Martin Poll, who is chaplain to Great Windsor Park and took place in the private Grade-II listed church which forms part of the Royal Lodge house.

It is thought it was the first time two royal babies were christened together.

Previous : Hungarians line up for shots as COVID surges across Europe
Next : ‘I tried Toby Carvery’s festive foot-long super pig – it tasted like Christmas’