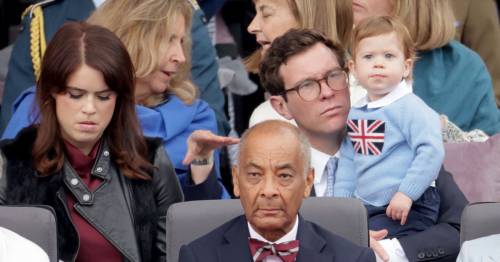 To mark Father's Day, she showed off a series of pictures of the doting dad and the youngster.

The 32-year-old took to Instagram to upload three images of Jack, 36, in action.

One photo was of her husband pushing baby August in a buggy along a country path.

The second showed the busy dad keep the boy occupied as he played some games with his son.

In the second, they both sit at home playing games
(

A final shot pictured Jack walking alongside adorably well-dressed August. at the Jubilee earlier this month.

"Happy Father's Day to the best dada!!" Princess Eugenie captioned the collection on her Story.

The mum continues to keep her son's face off social media.

During the celebration she bounced her young son on her lap after bringing him to the Jubilee Pageant.

August enjoys a cuddle with dad Jack during the Platinum Pageant
(

TV cameras picked up Eugenie holding up the one-year-old as the colourful performers passed by the royal box on The Mall.

And the little boy clearly came dressed for the occasion as he is wearing a very patriotic blue jumper with a Union flag across the front.

At one point he even waved as some of the performers went past before his dad Jack, who was dressed smartly in a suit was seen cuddling his son.

He was christened last year in a rare royal double christening alongside Zara and Mike Tindall's young son Lucas.

August was dressed to impress during the Queen's celebrations
(

Eugenie, Jack and son August all loved watching the flypast
(

August and Lucas both share the same middle name of Philip – a tribute to their great-grandfather Prince Philip who died last year shortly after the two boys were born.

In a documentary last year, Eugenie revealed August got to meet Philip shortly before his death in April.

Holding back the tears, Eugenie explained: "We named August, August Philip because grandpa has been such a huge, inspiring character in my life.

"I brought little August to come and meet him and told him that we had named him after him and it was such a lovely moment.

"We were very lucky to do that."

Previous : Woman describes tragic moment of UK’s worst air accident when ‘plane fell out of sky’
Next : Vladimir Putin threatened Gordon Brown during Moscow trip and made him sit in low chair