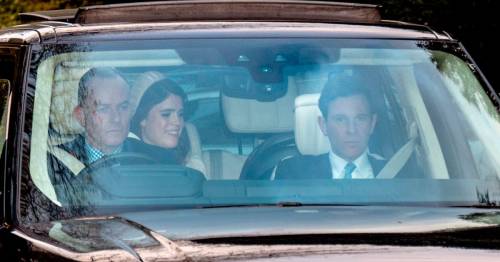 Princess Eugenie and her husband Jack Brooksbank have been pictured arriving at Windsor ahead of the christening of their son August today.

The Queen was expected to attend the double royal christening for her two latest great-grandchildren – the children of Eugenie and Zara Tindall – but she was not pictured at the ceremony.

It comes after the 95-year-old monarch pulled out of a string of public events in recent weeks, including a scheduled appearance at the Cop26 climate summit in Glasgow and the Remembrance Sunday ceremony, due to a back sprain.

The joint-christening service for the babies August and Lucas Philip took place at All Saints Chapel in Great Windsor Park, Berkshire.

The Sun previously reported the monarch would wait until the day to make a decision and consult with her personal doctor in advance.

Today, it has been reported that the Queen skipped the christening service as she recovers from a back injury.

Princess Eugenie and husband Jack Brooksbank's son August was meant to be christened in July before the event was cancelled due to Covid-19.

He was baptised alongside Lucas Philip, the son of Mike and Zara Tindall, born in March.

A royal source previously said: “Her Majesty is very keen to be there as she knows how important this is for her grandchildren and great-grandchildren.

"It’s set to be a heartwarming family occasion and a time of real celebration after what has been some challenging times for certain royals of late, including the Queen herself.

"She is keen to attend such a wonderful event after the great personal disappointment of missing last Sunday’s Remembrance events.”

The ceremony was led by Canon Martin Poll, who is chaplain to Great Windsor Park and took place in the private Grade-II listed church which forms part of the Royal Lodge house.

Other members of the Royal Family thought to have been in attendance are Prince William and Kate Middleton.

It is thought today was the first time two royal babies were christened together.

Royal commentator Penny Junor, who has written a number of books on the family, told the Metro: "I’ve never heard of two royal babies being christened together like this but it will be wonderful to have the Queen there.

"It would also send a fantastic message to the world that she is not ready to leave us yet.

"She’s very spiritual, a christening is a very important occasion for the head of the Church of England and being there will be of great importance to her."

Previous : UK Covid cases above 40,000 for fourth day in a row – as another 61 people die
Next : UBS foreign chair ticks more boxes than Deutsche’s