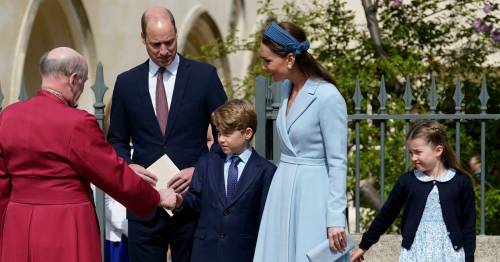 The Duchess of Cambridge is known to be determined to give her children as normal an upbringing as possible.

And this means being a very hands-on mum to Prince George, Princess Charlotte and Prince Louis.

But like many others up and down the country, she has to juggle her parenting duties alongside her work.

For Kate and husband Prince William, their work duties often take them overseas and quite often they are forced to leave their little ones behind in the care of their nanny or grandparents.

And previously in an extremely candid interview, Kate opened up about struggling with mum guilt when she has to say goodbye to her children.

She also explained that there is one question that George and Charlotte ask that gets to her the most.

She added: "Anyone who doesn't as a mother is actually lying.

"Yep – all the time, even this morning, coming to the nursery visit here – George and Charlotte were like 'Mummy how could you possibly not be dropping us off at school this morning?'

The three Cambridge children with their mum and dad
(

"It's a constant challenge – you hear it time after time from mums, even mums who aren't necessarily working and aren't pulled in the directions of having to juggle work life and family life."

During the chat, Kate also admitted she sometimes feels guilty about the parenting decisions she makes.

She said: "[You're] always sort of questioning your own decisions and your own judgements and things like that, and I think that starts from the moment you have a baby."

Kate is the new patron of the Maternal Mental Health Alliance
(

Earlier this week, it was revealed that Kate has taken a new top role with a charity dedicated to helping women and families affected by mental health challenges from being pregnant and having children.

Future queen Kate was announced as the Patron of the Maternal Mental Health Alliance, the UK wide organisation which brings together over 100 organisations to help those struggling with mental health issues.

In a video marking her new role, during Maternal Mental Health Awareness Week, the Duchess outlined the importance of being able to reach out for vital support.

Kate, 40, said: “The birth of a child is one of life’s greatest gifts.

“But it can also be one of the most challenging times for many families and one that should not be faced alone.

"No one is immune to experiencing anxiety and depression during this time. It is crucial, therefore, that all those who might be struggling are given the right support at the right time, so that they’re able to share these feelings without fear of judgement and can access the information, care and support they need to recover.

“And it’s down to each and every one of us to support parents and carers, and all those who are raising children today."

Previous : Dad’s heartbreaking tribute to son, 12, who took his own life after mum’s suicide
Next : Has Elon Musk changed anything about Twitter changed since buying it for £35billion? – World News