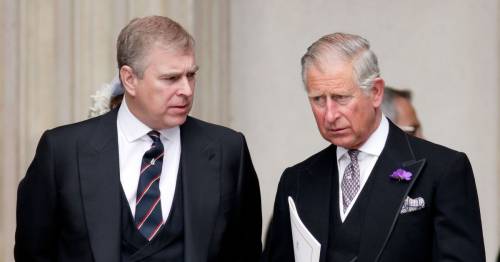 Prince Charles reportedly planned the axing of his brother Andrew over Christmas, it's claimed.

The Prince of Wales made up his mind that Andrew must leave the royal fold as he had “run out of road” before getting the backing of William, according to reports.

The Royal Family removed Andrew's military links and royal patronages on Thursday and said he will no longer be known as "His Royal Highness."

Charles is said to have consulted with William before they met with the Queen and it was decided that Andrew had to be removed as he was damaging the image of the Royal Family.

It was over Christmas that Charles came to the conclusion it was the right move to take, sources told The Sun and then he and William spoke to the Queen after Andrew's sex abuse hearing this month where he was hoping the case would be thrown out.

The Queen accepted it being “of the same opinion” although with a “heavy heart” before other royals were also consulted and agreed.

Charles felt that Andrew was damaging the Royal Family's image, it is reported
(

Princess Anne and Prince Edward then delivered the news to Andrew at his Royal Lodge last weekend.

A source told The Sun: “The collective view was that Andrew was damaging the entire family.”

Another stated: “He felt he’s just run out of road. So he discussed it with William in the days between Christmas and New Year and his son fully agreed with him. William and Charles then informed the Queen that they were of the same opinion. Ultimately, it was the Queen’s final decision but she told them she shared their view. The Queen and Andrew had the final conversations on the matter on Thursday.”

Another source was of a similar opinion saying that William felt Andrew was handling the situation badly.

Andrew's removal from royal life has raised the question of whether the Queen's son will have his security paid for him.

The bill to the taxpayer for Andrew’s annual security is said to be £2million and retired Chief Superintendent Dai Davis said for the time being he is likely to have a higher threat level as he is frequently in the news.

The Daily Mail reports that he said: "Whether (or not) he continues to use his titles, he remains the Queen’s son. Whether or not he is still afforded specialist protection will be based entirely around how serious intelligence suggests the threat level will be."

Home Office advisers, the Queen’s private security and a specialist committee will decide what the threat level is, said Mr Davies.

Previous : Boy, 16, shouted ‘do you want to get sliced up?’ then brutally stabbed dad with glass
Next : Chicago Bulls star guard Zach LaVine to have MRI on injured left knee