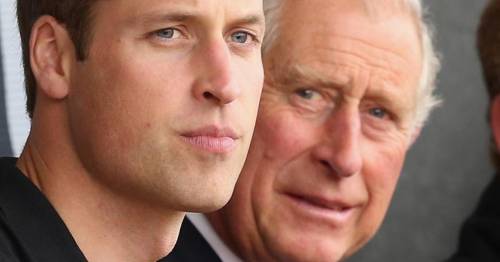 Prince Charles was heard having "explosive rows" with his son Prince William when he felt he was being "airbrushed" out of the Cambridge family's lives, it has been claimed.

According to insiders, the Prince of Wales felt "bruised" when Wills became extremely close to the Middleton family – who they described as his "surrogate family".

Speaking to The Mail, they explained that workaholic Charles organised his diary six months in advance which meant he was rarely able to attend last minute family events, including "impromptu" birthday parties for Prince George, Princess Charlotte and Prince Louis.

Royal editor Rebecca English explains that the heir to the throne felt "airbrushed" out of William's life.

She writes: "Explosive rows between father and son were often overheard by staff, with Charles — who hates family confrontations — burying himself in his paperwork to avoid the conflict."

Prince William with his dad Prince Charles, just before he started university
(

However insiders claim that relations between William and Charles have improved over the years and they are now much closer.

They have come together to support the Queen through a series of huge royal decisions, including the conditions of Prince Harry and Meghan Markle's new, non-royal lives and stripping Prince Andrew of his royal titles.

An insider tells the newspaper: "They are much more on the same page now. They will always be quite different characters, but there's a mutual respect."

Most recently, they jointly "blocked" Prince Andrew from joining the senior royals for the Garter Day procession at Windsor Castle.

While he still took part in the private ceremony, which takes place behind closed doors, he was missing from the public section of the day with the Queen apparently telling him to stay out of sight “for his own good” after Charles and William raised fears of a public backlash.

There were reports he was hoping to use an appearance with the royal family as a first step to returning to public life.

Charles and William will be Britain's next two kings
(

A source told The Sun : “He was confident and bullish he can make a comeback.”

Prince Andrew stepped down from royal duties in the wake of a sex scandal earlier this year.

He denied the allegations against him and later came to an out of court settlement with his accuser. The settlement is not an admission of guilt.

In January, ahead of his legal settlement in the case, the Queen stripped Andrew of his honorary military roles, including Colonel of the Grenadier Guards, and he gave up his HRH style.

According to the Daily Mai l they were both "dismayed" by the prominent role Andrew played in Prince Philip's Service of Thanksgiving. The Duke of York drove from Windsor to London with his mother and accompanied her down the aisle.

Previous : ‘My daughter was sent home from A&E hours before she died – it must not happen again’
Next : Cost of Living march: Protesters take to streets demanding action on skyrocketing prices