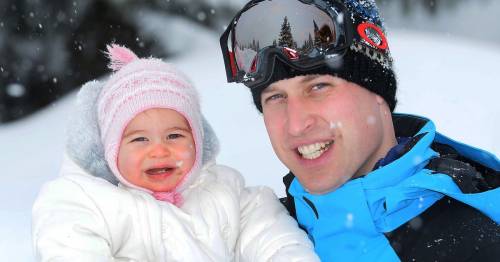 Prince William’s sweet nickname he has for daughter Princess Charlotte

The Royal Family are known for their love of pulling pranks, giving each other joke Christmas presents and generally poking fun at one another whenever they can.

It has become well-known that many of the royals opt to use funny nicknames when talking about one another, much like any other family.

Whether it is Cabbage or Squeak, Gary or Stavros, the royal nicknames are hilarious and offer a glimpse at the light-hearted nature of the family behind the crown.

One young royal who has a particularly sweet pet name is Princess Charlotte.

Her father, Prince William was heard using it when Prince George, Princess Charlotte and Prince Louis visited the Chelsea Flower Show in 2016 to see the 'Back to Nature Garden' that the Duchess of Cambridge had created.

The Cambridge family's visit to the famous show in 2016 offered the public an intimate glimpse at the family as they explored the garden.

While he played on a rope swing in the corner of the garden, Prince William shouted out to his daughter and asked her to give him a push.

But instead of saying 'Charlotte', he called for 'Mignonette'. The French word is said to mean "small, sweet, and delicate" or "cute".

During a later visit to Northern Ireland, it was revealed that Kate calls her daughter 'Lottie' as she chatted to waiting members of the crowd.

It is a royal tradition that while a royal is at school or while they are working in a professional capacity that they are known by their first name and use their parent's title as a last name. This means that Princess Charlotte is known as Charlotte Cambridge to her classmates and teachers.

Prince William was heard using the nickname in 2016
(

The same goes for her older brother as he is known as George Cambridge at school, and it is likely that younger brother Louis uses the same style when he goes to Willcocks Nursery in Kensington.

Prince William and Prince Harry also adopted this tradition during their education and time in the military. They both took the last name of Wales after their father’s title of the Prince of Wales.

However, the tradition of using a parent’s title as the last name is not something that every royal chooses to do. As the official last name of the Royal Family is Mountbatten-Windsor, many royal children use that surname at school.

The same goes for Prince Harry and Meghan’s children, Archie and Lilibet. Instead of using the last name of Sussex (after their Dukedom of Sussex), they chose to give them the last name of Mountbatten-Windsor.

Previous : Mum’s warning as son nearly dies after lollipop got stuck in his throat
Next : Heartbroken mum fears son, 11, will miss out on Disneyland over passport delay fiasco