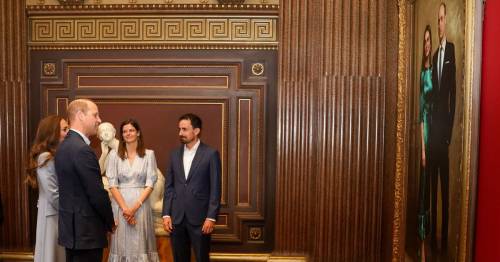 A stunning new portrait of the Duke and Duchess of Cambridge – the first of themselves together as a couple – has officially been unveiled.

Prince William and wife Kate travelled to Cambridge's Fitzwilliam Museum today, where the painting is on display, to cast their eyes on it for the first time.

And a William's reaction at seeing the glamorous artwork was caught on camera – and it's not quite what you might expect.

After looking at the painting, he quipped: “It’s quite big” before letting out a giggle.

However he later told the artist behind the portrait, Jamie Coreth, that it was amazing.

William and Kate's first look at their portrait
(

The duke and duchess both studied history of art at St Andrews University, though William later switched to geography.

In the stunning painting, William is depicted in a black suit with a white shirt and blue tie while Kate wears the emerald green Vampire's Wife gown she wore while on a visit to Ireland in 2020.

The brand new portrait of the couple

The pair also have the arms around each other with the painting showing them gazing off into the distance.

The artist, Mr Coreth, is described on his website as “one of Britain’s leading portrait artists” who “focuses on the character of his sitters, evoking a sense of their presence in his work”.

The royal couple in Cambridge today
(

He said: "It has been the most extraordinary privilege of my life to be chosen to paint this picture. I wanted to show Their Royal Highnesses in a manner where they appeared both relaxed and approachable, as well as elegant and dignified.

"As it is the first portrait to depict them together, and specifically during their time as The Duke and Duchess of Cambridge, I wanted the image to evoke a feeling of balance between their public and private lives.

"The piece was commissioned as a gift for the people of Cambridgeshire, and I hope they will enjoy it as much as I have enjoyed creating it.”

The painting will also be loaned to the National Portrait Gallery for a short time in 2023 to mark the Gallery’s reopening.

Previous : Fleeing driver grabbed police officer’s arm and dragged her down road as she screamed
Next : Family of ‘drunk’ grandad who died after stairs fall sues Wetherspoons for £150,000