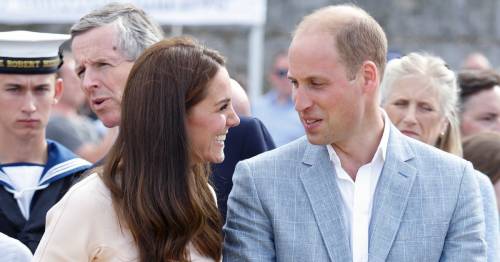 The wedding of the decade saw Prince William marry his university girlfriend, Kate Middleton, in front of a global TV audience of more than 60 million people.

As they say 'I Do', the couple became the Duke and Duchess of Cambridge – and 10 years later they are now proud parents to three children.

While few of us need reminding that their romance started when they were studying at St Andrews University in Scotland, it would seem that the royal couple’s paths crossed ten years before that.

The young prince, then nine, was a student at Ludgrove Prep School and his teammates went to Kate's school – St. Andrew's Prep – for a match

In her book, Kate: The Future Queen, Nicholl writes: "Although she wasn't especially interested in boys, the arrival of one particular young man had caught her attention.

"Nearby Ludgrove Prep school would often play matches against St. Andrew's Prep, and there was much excitement when Prince William, a left back on Ludgrove's Colts team, came to St. Andrew's to play a hockey match when he was nine years old.

"William, like Kate, loved sports and was one of the best hockey and rugby players in his year. Of course, the arrival of the prince generated a flurry of excitement."

Prince William spent his gap year in Chile and Belize

While the couple’s official meeting occurred when they were both enrolled at St Andrew’s University in 2001, it also came to light that Kate had chosen the same expedition company as her husband, Raleigh International, to do her gap year with.

The pair spent ten weeks trekking, helping locals and building in Chile, albeit a few weeks apart. Malcolm Sutherland, who ran both expeditions, has called the coincidence “absolutely crazy.”

He continued: "For me, it was a normal assumption that everybody else would have realised what that connection was. I think a lot of people don't realise there is that common connection there in their pasts."

During Kate's gap year, she studied at the British Institute in Florence, participated in the Raleigh International programme in Chile and crewed on Round the World Challenge boats in the Solent.

Another part of Prince William's gap year was certainly less glamorous than his future wife's as he spent it in the jungles of Belize with the Welsh Guards.

Katie Nicholl wrote in her book 'William and Harry' that the prince was placed in a "tough environment." She explained how "he was taught how to kill and prepare his food. An exercise code-named Native Trail began with instructors slaughtering a pig, hanging it from a pole and butchering it.”

She added: “The soldiers, William included, were then given a live chicken to dispatch. They had to wring its neck and cut off its head and feet with a machete, pluck its feathers and gut it before cooking it over a fire, exactly as they would have to do if they were living off the land in a jungle war. They were shown how to make a termite stew – and then made to eat it.”

The sleeping situation was also a challenge: "at night, William tried to snatch what little sleep he could in the rain in a hammock strung between two trees."

In addition to Belize and his Raleigh Challenge in Chile, William also reportedly used his gap year to explore places like Kenya and the Indian Ocean island of Rodrigues.

Previous : UK’s ‘most prolific dad’ has 160 kids – but will see only one of them this Father’s Day
Next : Kayaker swept 4km out to sea rescued after his Apple Watch sends out distress signal – World News