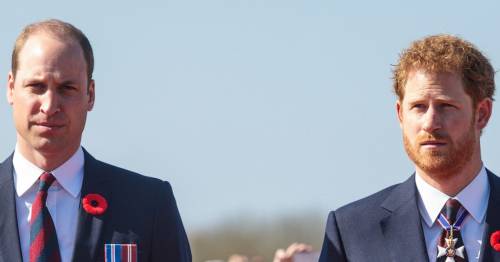 Prince William's close friends have revealed he is "mourning" his rift with Harry but there is "little chance of repairing it" anytime soon.

Relations between the brothers are said to be at rock bottom, with The Duke of Cambridge insisting Prince Harry crossed a line when he and wife Meghan Markle levelled accusations at the Firm during their interview with Oprah.

One of William's close friends told the Daily Mail : "He [William] alternates between grieving for what he has lost and feeling really, really angry about what his brother has done.

"He truly loves Harry and feels he has lost the only person, aside from his wife, who understood this strange life of theirs.

"But he believes there are things you just don’t do. And Harry has 100 per cent crossed that line."

One pal told the paper that William is "very principled" and believed Harry crossed a line by making repeat accusations on a global scale.

His friends believe Prince William had no option to remain silent as they did not want to air their dirty laundry in public and end up in a slanging match with his brother.

Friends admit the question of whether William would ever repair his bond with Harry was a hard one to answer, but the Prince will always keep the possibility of repairing his relationship with his brother open, as he's still protective of him.

The repercussions from the Oprah interview have affected all the family with The Duke of Cambridge believing his father, Prince Charles, has been hurt by their fall-out.

Prince Charles is said to be trying to keep the public drama to a minimum by remaining silent, according to close friends, but would like the brothers to repair the relationship one day.

During Meghan and Harry's bombshell interview with Oprah, William felt he was 'massively disrespected' by the Duchess of Sussex when she claimed ot was his wife Kate who made her cry before the lead up to the wedding, something which friends say he disputes.

But the paper reports there is one thing Prince William is not shy about, and that's insisting he's fallen in love with being a dad.

Friends told how being father to Princess George, 8, Princess Charlotte, 7, and Prince Louis, 4, has made him happy beyond his wildest dreams.

Meanwhile, his marriage to Kate remains strong and, despite a topsy-turvy relationship with his dad, Prince Charles, friends claim it's better now than it's ever been for the pair.