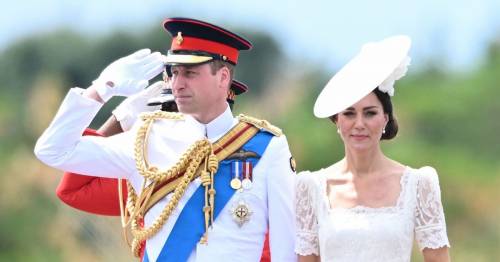 The Duke and Duchess of Cambridge should have "gone with their gut instincts" and not taken a ride in an open-top Land Rover during a military parade in Jamaica, an insider has claimed.

Prince William and wife Kate embarked on what at times was a turbulent tour of the Caribbean earlier this year, where they visited Belize, Jamaica and the Bahamas.

While in Jamaica, William dressed in a white military uniform as he and Kate were driven in an open-topped Land Rover during a military parade.

The photos of this were reminiscent of the ones from 1953 when the Queen and Prince Philip were driven in a Land Rover in the country.

However, William and Kate were criticised by some for echoing Britain’s colonialist past, with one campaigner branding the photos: “Absolutely awful.”

At the end of the tour, William released an unprecedented statement saying his job is “not telling people what to do” and added: “Who the Commonwealth chooses to lead its family in future isn’t what is on my mind.”

According to the Daily Mail, some in William's camp believe he and Kate were left open to unfair criticism – especially as they were reportedly not keen on riding in the Land Rover either.

An insider told the publication: "The big problem was not with the specifics of the tour — although the duke himself acknowledges that it was not a good look to agree to get into that Land Rover.

"They were pushed into it, but should have gone with their gut instincts, which are normally sound."

Another insider told the Daily Mail they agreed but said at least issuing the statement allowed William to "set out his stall" for the future.

Some criticised the photos for looking echoing Britain's colonial past
(

They added: "The duke strongly felt it was something that needed to be said and [it] was definitely a turning point for him. He has a shared responsibility in the institution's future and wants to use his voice. He knew he had to draw a line in the sand, so he sat down with his team and said, 'This is what I want to say and I'm going to say it'. The duke's view is that the Royal Family will be around for as long as people want them and need to prove their value. He is listening and he is learning."

The insider comments come as ahead of his 40th birthday tomorrow, h e has written an article and given an interview to the Big Issue, which is sold by those affected by homelessness, vowing to keep shining a light on the problem.

In the latest issue of the magazine, William, who has long been involved in supporting charities that help the homeless, opens up about why he refuses "to believe that homelessness is an irrevocable fact of life".

He talks about his mother, the late Princess Diana, and how his interest in wanting to solve the homelessness issue came when he first visited a homeless shelter with her aged 11.

He writes: "I was 11 when I first visited a homeless shelter with my mother, who in her own inimitable style was determined to shine a light on an overlooked, misunderstood problem."

And he adds that just like his mother, he intends to introduce his children – Prince George, Princess Charlotte and Prince Louis – to charitable causes in the future.

He explains: “While I may seem like one of the most unlikely advocates for this cause, I have always believed in using my platform to help tell those stories and to bring attention and action to those who are struggling.