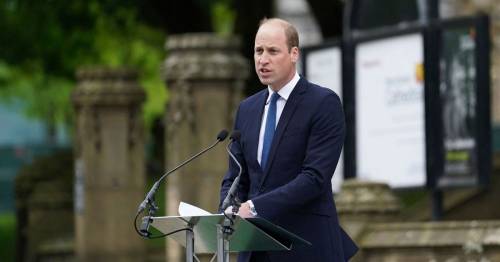 Prince William has paid tribute to the fortitude of the families torn apart by the Manchester Arena terror attack, while recalling living with his own grief, saying: “There is comfort in remembering.”

The Duke and Duchess of Cambridge today stood shoulder to shoulder alongside heartbroken loved ones of the 22 tragic victims, slaughtered at the end of an Ariana Grande concert on the evening of May 22, 2017.

Manchester born bomber Salman Abedi, 22, detonated a home made bomb hidden in a rucksack, wreaking havoc on a night of joy which ended in devastation.

In honour of those who perished in the attack which rocked the nation, the Glade of Light Memorial was commissioned to act as a place of hope and solace for the families.

William spoke of the importance of him attending the unveiling alongside the Duchess, saying they were there “to remember the twenty-two lives so brutally taken.

"To acknowledge the hundreds of lives that were irrevocably changed and to pay tribute to the resilience of this great city.”

The Duke spoke of his own grief after the death of his mother Princess Diana in 1997, as he told of the importance of holding on to cherished memories of those who have been lost.

He said: “I remember only too well the shock and grief on the faces of those I met when I visited Manchester in the days following the atrocity.

“And the rawness of emotion at the Commemoration Service, held at your Cathedral just here, a year later. Five years on I know that the pain and the trauma felt by many, has not gone away.

“As someone who lives with his own grief, I also know that what often matters most to the bereaved is that those we have lost are not forgotten.

“There is comfort in remembering.

“In acknowledging that, while taken horribly soon, they lived.

“They changed our lives. “They were loved, and they are loved. It is why memorials such as the Glade of Light are so important. Why Catherine and I so wanted to be amongst you today.”

Hundreds of people were injured alongside the 22 who died, who included six children under 16 with the youngest, Saffie-Rose Rouyssos, who was just eight.

The monument, designed and constructed in consultation with the families of victims, will serve as a reminder for a city which came together after being left for adevatasted by the assault.

Adorned with a white marble ‘halo’ ring which sits at its heart and inscribed in bronze with the names of those who lost their lives, it commemorates the victims as well as those who were left injured or affected by the horror.

William and Kate gathered at the site in the shadows of Manchester Cathedral to officially unveil the memorial, designed following an international competition.

Personalised memory capsules, filled with memories and mementoes of them provided by loved ones, have been embedded within the stone.

William said the monument would act as “a counter to the violence and hateful disregard for human life that caused this tragedy”, as he vowed how both he and Kate stood in solidarity with the families struggling to repair lives left shattered by the bloodshed.

The Duke added: “A memorial is a physical statement that the memory of those who died lives on.

“It is a focal point for commemoration and reflection.

Duchess Of Cambridge stands up after laying flowers
(

“A place of solace for the families, the injured and all those affected. A place for Mancunians and visitors alike to acknowledge what the City went through.

“It is a counter to the violence and hateful disregard for human life that caused this tragedy.

“I hope that this beautiful, tranquil space which, for all the challenges, I know many of you were involved in shaping, will provide all of this and more for generations to come.

“Catherine and I know that the atrocity’s impact will last a lifetime and beyond, and that the healing process is still on-going.

“We want to assure all of you who are struggling that you are very much in our thoughts. We stand with you as you continue on that difficult journey.”

The Glade of Light was designed to be a living memorial, a tranquil garden space for remembrance and reflection, featuring plants which grow naturally in the UK countryside selected to provide year-round colour and echo the changing seasons.

Around the anniversary every year, May 22, the white flowers of a hawthorn tree planted at its centre will bloom.

The royal pair in Manchester together
(

The couple, who previously attended a National Service of Commemoration at Manchester Cathedral on the first anniversary of the attack, appeared pensive as the names of the 22 souls lost was read out to the crowd.

A rendition of Halo by Beyonce by the Manchester Survivors Choir and Pass Wood High School Choir saw many of those gathered break down in tears while others held on to those sat next to them.

William and Kate both appeared distinctly moved by the song, the Duke frequently looking down with his jaw clenched tight as Kate transfixed her gaze directly at the choir.

During his speech William paid tribute to the first responders who rushed to help those who lay dying and injured in the aftermath of the blast.

The Duke also recalled how in the days that followed a sporadic scene in Manchester City Centre went viral to be seen around the world of locals breaking out in song to sing the Oasis hit Don’t Look Back In Anger.

He said: “We remember the entirety of the Manchester community who responded in the most heart-warming and life-affirming ways possible to support those affected.

“This was an attack on an evening of music.

“And it occurred in a city that has given the world so many songs to sing.

“When the people of Manchester gathered to pay respect to the victims just days after the atrocity, you told the world that your music would not be silenced.

“Instead, you raised your voices together and you sang a song of love that was written by some of this city’s most famous sons.

“On that day you told each other that you would not look back in anger.

“And you showed the world the true heart of this extraordinary place.

“And let’s look back with love for the ongoing strength of the great city of Manchester.”

After taking a short walk around the memorial garden, the Duchess paused to lay flowers at the foot of the memorial before standing back and solely bowing for a moment.

Following the ceremony, the royals joined some of the bereaved families and those involved in the response effort at a private reception inside the Cathedral.

When opened to the public in January, the mother of one of the victims said the bombing should never be forgotten.

Figen Murray, the mother of 29-year-old Martyn Hett, said the memorial “would be right up his street” and that he would “love” the people of Manchester to visit it.

Before the unveiling, Joanne Roney, chief executive of Manchester City Council, said: “As we approach the fifth anniversary of the May 22 2017 attack, the Glade of Light is a potent symbol of how Manchester will continue to hold those who lost their lives, and everyone who was affected by those terrible events, in our hearts.

“We will never forget them.”