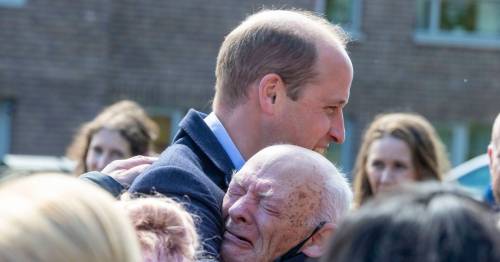 At first, I thought it was the visceral, from-the-gut emotion contorting the face of this overcome, middle-aged man, which glued me to the image.

But it wasn’t just that.

The reaction of 66-year-old William Burns on meeting his namesake, Prince William, on a walkabout in Kennishead, on Glasgow’s south side, yesterday, was undeniably deeply moving.

His head barely reaching the future King’s shoulder, he’s floored by this Royal visit, or perhaps what it signified here especially, where the Duke and Duchess were meeting people who had suffered some of life’s hardest knocks.

But then I realised what was making me look twice was the hug itself.

William and Kate chat to students at the University of Glasgow
(

Because men still don’t hug each other much, and it took a very public ‘man hug’ to remind me of that.

No, we don’t usually see Royal males hug on walkabouts. That’s typically the domain of the ladies, who from time to time demonstrate their feminine side by doling out affection, taking their cue from the master hugger, Princess Diana.

That doesn’t surprise, because unconscious bias still deems women the care givers, although even then, it flies in the face of a traditional Royal no touch tradition.

After their PR disaster in the Caribbean last month, sources have muttered about a change of approach from William and Kate during their public outings, a less stuffy, more approachable stance.

But somehow – that’ll be my bias – I never imagined it would involve hugs from Prince William.

Again, because men, Royal or not, don’t really do it.

When men ‘in real life’ do hug, it’s often accompanied by a laugh, or a verbal labelling of ‘man hug’, or ‘bromance’, as if to say ‘Nothing to see here, this isn’t a hug, hug’.

As if to stipulate from the outset, don’t read into this.

Sport seems to be the one arena where touch is more acceptable.

Cultures in other countries don’t seem to have the same problem. Male Italians, Greeks, the French, are more comfortable with tactility.

This stuff matters, because the hug is important.

Stress kills men younger than it does women. Suicide rates in men are three times higher than in females; highest among middle-aged men.

Academics have found those experiencing lack of touch, or ‘skin hunger’, as one US professor termed it beautifully, can be more lonely and depressed.

So whether it’s part of a PR drive or not, what Prince William did by succumbing to the all-out, unapologetic ‘hug hug’ of William Burns, is important.

It’s reminded us men can hug, and should.

In his ongoing championing of mental health, it might be one of the Duke’s most impactive acts.