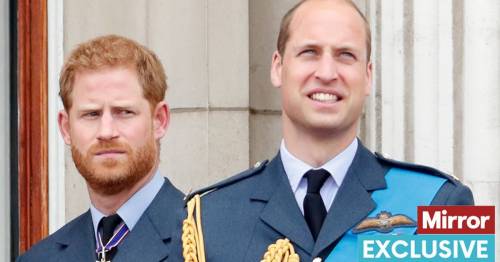 Prince William feels ‘there’s nothing more he can do’ for Prince Harry, says expert

Prince William never got along particularly well with younger brother Prince Harry and feels "there's nothing more he can do" for him, a royal expert has claimed.

There has been much made of the rift between the two brothers with their frosty relationship reportedly sparked by William's concerns over Harry's fast-developing relationship with Meghan Markle ahead of their royal wedding in 2018.

The tense row quickly boiled over – with Harry claiming his brother was "trapped" within the royal system during a bombshell interview with Oprah Winfrey after quitting as a senior royal.

And despite Harry bringing his family to the UK from California earlier this month for the Queen's Platinum Jubilee celebrations, the two brothers were not pictured together and are believed to have not met up privately.

Today, future king William is marking a milestone birthday as he turns 40 – just as his influence on the monarchy is really starting to show.

And according to royal expert and author Ingrid Seward, editor-in-chief of Majesty magazine, the relationship between the brothers is still at a very low ebb.

She told the Mirror: "Despite appearing to do so, the two boys never got along particularly well. They sat together for TV interviews on their joint causes joshing with each other but they were never very good friends.

There is reportedly a rift between the two brothers
(

"Kate went a long way to encourage their relationship and although William has always looked out for Harry, he feels at the moment there is nothing more he can do.

"Instead, he is concentrating on what he knows he can achieve rather than wasting time on things he can’t change.

"He knows what’s in store for him and he knows how tough it is but with the help of Kate and support from his father the Prince of Wales, he remains positive and optimistic about his future."

The brothers with their respective wives Kate Middleton and Meghan Markle
(

As he marks the big birthday, Ingrid agrees that William has a growing influence over the institution of the monarchy – and says he is respected with his opinions acted upon.

She believes at times he also gets frustrated with royal life and has moments where he wants to give it all up, but his strong sense of responsibility reins him in.

Ingrid added: "Prince William has a growing influence over the institution of the monarchy. He is respected and his opinions are acted upon. He can be intolerant but it is not because he is disagreeable but because he cares.

"He wants things to run smoothly and when he and Kate were ridiculed during their Caribbean tour last March, he was understandably furious.

"As far as he was concerned someone should have read the current mood of the country and acted upon it long before the schedule was arranged.

"William is strongly intuitive like his late mother and has her same longing for emotional security. He has found this within his marriage and the family environment Kate has created.

"He has had moments of wanting to break away from the restrictions imposed upon him by his royal life, but his sense of responsibility prevented him from doing so.

"William was always a thinker and is able to rationalise any given situation which makes him a trusted support for the Queen and a growing influence over the royal family as a whole.

"He is a moderniser and knows the dead wood of the family has to be cleared away, hence his impatience with the Prince Andrew situation.

"He almost certainly sees the duke as someone who could bring the institution into more disrepute. He wants it dealt with and is not afraid to say so, as it is he who will be picking up the pieces not his uncle."

Ingrid Seward is author of Prince Philip Revealed, A Man of his Century, and editor in chief of Majesty magazine.