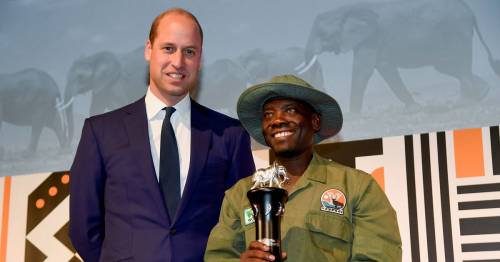 Prince William was beaming tonight as he arrived in London to announce the winners of the Tusk Conservation Awards.

The Duke of Cambridge, 39, arrived at BFI Southbank in London this evening to celebrate Africa's leading wildlife protectors.

The prestigious Tusk Awards, hosted by Kate Silverton, returned tonight as a face-to-face event after last year's show was held virtually because of the Covid-19 pandemic.

Prince William launched the annual ceremony in 2013 to highlight and celebrate the achievements of Africa's unsung heroes who lead conservation efforts.

The Duke presented each winner with their awards before making a speech. He then attended a reception with key members and supporters of the Tusk Trust.

The Duke also spoke to tonight's winners to hear more about their work on the frontline of conservation efforts in Africa.

In a speech, he paid tribute to those risking their lives to protect endangered species in Africa.

He said: “In the aftermath of the COP26 conference, it is clear that we must see the environment, conservation and climate change through the same prism and not in isolation. Africa’s extraordinarily rich biodiversity has the ability to sequester vast amounts of carbon.

“But this is only possible if these landscapes remain truly intact and are protected as functioning eco-systems.”

He told guests: “Our wildlife plays a vital role in keeping nature in balance and maintaining this precious cycle of life.

“If we keep destroying or removing the threads that make up the natural tapestry of life on earth, it will simply begin to break down, exacerbating climate change still further.”

He also highlighted the devasting impact of Covid-19 on conservation projects in Africa that have seen tourism revenue collapse in the last 18 months.

“Africa has been hard hit, as economies, jobs and livelihoods have been devastated by lockdowns and travel restrictions,” he said. “Many of the Tusk projects I have been lucky enough to visit have been hugely impacted, particularly where there is a dependence on tourism to underpin their conservation work.”

Prince William, who is a Royal Patron of Tusk Trust, has taken part in the annual awards several times and last year recorded a video message congratulating the winners.

The first one went to Simson Uri-Khob, chief executive of Save the Rhino Trust in Nambia, who won the Prince William Award for Conservation in Africa, honouring his work for over 30 years saving his country’s black rhino population.

Nigeria won the Tusk Wildlife Ranger Award for his bravery and efforts in cutting previously rife elephant poaching to just one case since 2015.

Mr Saidu dedicated his award to the 100 African park rangers who on average lose their lives in the field each year, many killed by poachers hunting endangered species. A roll of honour was played listing 94 rangers who have lost their lives this year.

Julie Razafimanahaka, executive director of Madagasikara Voakajy, a conservation organisation in Madagascar, won the Tusk Award for Conservation in Africa for her work preserving the Mangabe rainforest and the species that inhabit it.

Tonight's award ceremony comes as the Queen is said to be 'upset' over a new BBC documentary about alleged warring between members of the Royal Family.

The Palace is reportedly angry with the corporation who is said to have refused to let it watch The Princes And The Press before it is aired on BBC2 on Monday.

It is claimed the programme will hint that William and Harry – or their advisers – planted smears against each other in the media.

According to the Mail on Sunday the Palace has warned it will no longer co-operate with future BBC projects unless it is given a right to respond.

Previous : With Groveland Four exoneration, daughter sees father’s name cleared after 72 years
Next : Where did Adele go to school and what did she study at BRIT school?