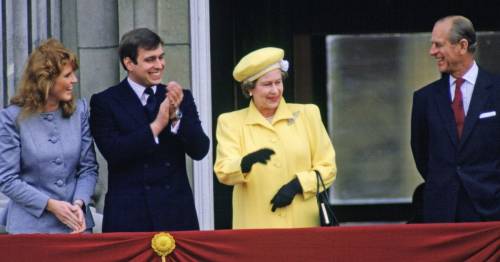 Sarah Ferguson is “thrilled” to spend more time with the Queen and ex-husband Prince Andrew which was impossible before because Prince Philip “couldn’t bear her”, claims a royal expert.

Until recently Fergie would not have been welcome at Balmoral because of the Duke of Edinburgh but now she is enjoying a “very nice time”, according to Angela Levin.

In fact, Fergie, whose marriage problems with Andrew caused plenty of controversy for the royals, now feels that she is “back in the crowd”.

Lurid headlines about the Yorks’ relationship led some royals to distance themselves from Fergie, and Ms Levin has said that Philip couldn’t stand her.

Ms Levin told GB News: "I think she is going through a very happy phase.

"First because she has got a book out, a first novel which I don't think has gone down very well but still nonetheless she has written her first novel."

She added: "[Fergie] is also thrilled that she can now go on holiday with him to Balmoral and be with the Queen, who she says is a much better mother to her than her own mother was, which is quite interesting.

"But it is something she has never been able to do before, for 30 years I think.

"Because the Duke of Edinburgh couldn't bear her in the same room. He thought she brought the monarchy into very bad repute and wouldn't let her stay.

"So she thinks she is back in the crowd now."

Fergie has a good relationship with the Queen and says she is a better mum than her real mother, it is claimed
(

Ms Levin also noted that Fergie and her ex-husband were spending time together. She added: "She is back there with him and they can have a very nice time."

This comes amid rumours that Fergie and Prince Andrew could possibly remarry having become close again at Balmoral, reports the Daily Star.

A source close to the couple told Vanity Fair: "Sarah and Andrew have been closer than ever in the past year.

"They still love and care for each other a great deal and have been living together during the pandemic.

"It has rekindled something and I can see a second wedding happening if it all goes Andrew's way."

Andrew is spending time at Balmoral having stepped back from royal duties due to allegations of sexual misconduct.

The Queen has had a difficult year with the loss of her husband and problems over Prince Harry but she has also had the birth of baby Lilibet to celebrate, although she is yet to meet her newest great-grandchild.

Previous : Torrential rain batters London with landmarks flooded with warning of more to come
Next : Jake Paul has four-fighter shortlist for next bout after Tyron Woodley win