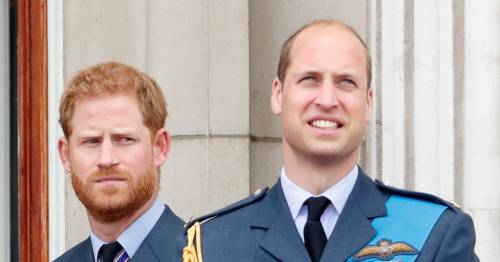 Exactly two years ago, Prince Harry faced his family for crunch talks on his future in what became known as the Sandringham Summit.

Just days earlier, he and wife Meghan Markle had released a statement outlining their intention to step down as senior royals to carve out a new life in North America.

At the summit, Harry met with the Queen, Prince Charles and Prince William to negotiate his and Meghan's exit from the Firm.

Of course, from being young children, both Harry and older brother William appear to have been very much aware of their differing futures.

William is a direct heir to the throne and will one day be king, while it's likely that over time Harry will slip down the line of succession.

And at the tender age of four, Harry is said to have made a shocking outburst directed at his older brother that eerily predicted his future life.

It came as the pair were travelling from London to Gloucester for a weekend when they started squabbling like any normal siblings.

The incident was overheard by Ken Wharfe, a long-serving protection officer to the royals, who was dismayed by what he heard.

The young princes with their mother Princess Diana
(

The brother pictured with their mother in 1989
(

"Diana would always take the two boys to Highgrove in Gloucestershire. On this particular occasion Diana was driving, I was sat in the front, William and Harry in the back," explained Ken in Channel 5 documentary Prince Harry: The Troubled Prince.

"They’d clearly got off to a bad start because they were arguing before we’d even left."

The last time William and Harry were pictured together in public
(

The young princes' nanny had to be referee as the boys argued in the back seats of the car.

Ken added: "Harry out of nowhere said: 'William, one day you’ll be king, I won’t, it doesn’t matter therefore I can do what I like'."

Their mother Princess Diana was said to be stunned by the remark and questioned where Harry had got it from.

Now more than 30 years later, the seemingly off the cuff comment appears to have become almost reality.

William along with his wife the Duchess of Cambridge is being primed to be a future Prince of Wales and eventually King – as the 95-year-old Queen takes on fewer duties.

While Harry and wife Meghan are now living in California after signing big-money deals with the likes of Netflix and Spotify.

Previous : The Supreme Court takes up a case, brought by Ted Cruz, that could legalize bribery
Next : U.N. envoy urges ‘inclusive’ ASEAN approach to Myanmar crisis