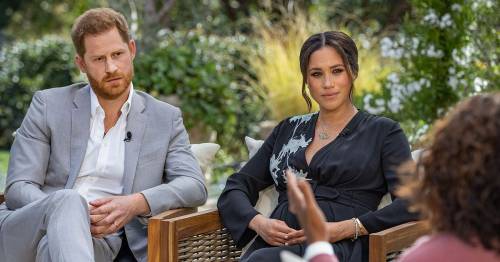 A friend of Prince Harry 's from his former army days has said he "genuinely hopes" that the Oprah Winfrey interview was "worth it to him".

Ex-Household Cavalry Lance Corporal Martyn Compton has been a friend of the Duke's for over 15 years but said he was "shocked" and "amazed" by his and Meghan Markle's decision to step down as senior members of the Royal Family.

Compton also said that he hopes the decision to step down and thus, relinquish his patronages and commitments, is one he doesn't "come to bitterly regret".

Just a few weeks prior to the Sussexes bombshell interview with the US TV show host last year, Compton said that he "genuinely hopes" the interview was "worth it to him".

He added that "nobody knows" the Prince's motivations, The Daily Star reports.

However, he said he really hopes he had given himself "the time to think it all through".

He said: "As Prince Harry's friend and someone who has served alongside him, I’m shocked and amazed it’s all come to this.

"I genuinely hope the interview with Oprah Winfrey and all that goes with it is worth it to him as this is a very high price to pay.

"I don’t know what he’s getting out of it, perhaps it’s getting something off his chest. But with high-profile deals, including Netflix, what I do know is that no royal should ever be seen to be cashing in.

"No one knows his motives apart from Prince Harry in agreeing to do this interview. But I really hope he has given himself the time to think it all through".

He said he knows how much being in the military means to Harry and gained the respect because he "earned it," not because of "who he was".

The ex-Household Cavalry Lance Corporal added that his view is that the Duke can't have it "both ways".

This came following the announcement made by Buckingham Palace that Harry could not continue with the "responsibilities and duties" that come with a life of public service.

He was subsequently stripped of his titles and privileges, including his honorary Captain General of the Royal Marines role.