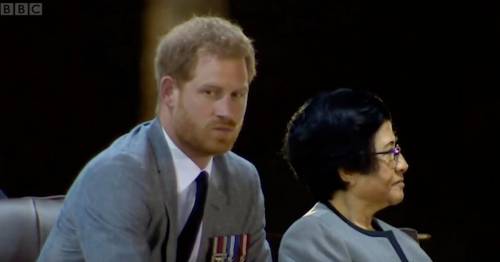 Prince Harry spent his royal tour to Australia and New Zealand "staring daggers" at the journalists who accompanied him and Meghan Markle on the trip, a royal correspondent has claimed.

The Duke of Sussex's sticky relationship with the media has been well-documented since his mum Princess Diana's death in 1997.

During a recent virtual summit, the 37-year-old claimed the word "Megxit" was created by trolls before being amplified in the media.

Now, the new BBC documentary ' The Princes and the Press ' has taken a deeper look at the Royal Family's relationship with the media.

In one clip, royal experts recalled a moment of Harry's reaction to journalists joining one of his first international tours with Meghan.

Prince Harry spent a royal visit to Australia and New Zealand 'staring daggers', it has claimed
(

The Duke and Duchess of Sussex went on a royal tour of Australia and New Zealand in October 2018.

The Times’ royal correspondent Valentine Low noted: “Harry had been pretty grumpy on that tour.

“There was a long, and incredibly boring welcome ceremony in Fiji. And it was very interesting watching them both, because Meghan was sitting just absolutely perfect on a little throne, Harry was just glowering.

“He was cross with the media, and he spent the entire welcome ceremony just diverting his gaze to one side just to stare daggers at the press pack.”

The BBC's Jonny Dymond pointed to the Duke's historic disgust for the media.

He suggested: "He [Harry] can’t bear the media. He has a visceral reaction to cameras, to notebooks, to journalists."

Valentine also gave an example of when Prince Harry allegedly confronted the media as they travelled on the plane back to Sydney from Tonga.

They said Harry was persuaded by his team to speak to the members of the media on board.

He claimed: "He came back, and said something to the effect of, ‘thanks very much for coming guys – not that you were invited'."

Again, Jonny suggested that this was an almost innate reaction on the part of the prince, saying: “He did it not because he thought, ‘I’m going to go back and insult them, he did it because he went back, he saw us, and he just [gestures to vomit] like that because it is absolutely built into him.”

It comes as royal aides were said to be keeping a close eye on BBC2’s The Princes and the Press, which looks at how William and brother Harry have been covered over the years.

The Royal Family was reported to be furious at not having been given an opportunity to properly respond to claims made in the programme.

The first episode, which was broadcast on Monday night, charted the years from the Queen’s Diamond Jubilee in 2012 up to the wedding of the Duke and Duchess of Sussex in 2018.

Episode 2, out next week, examines the period from 2018 to 2021, and the royal tours of the Sussexes and the Cambridges.