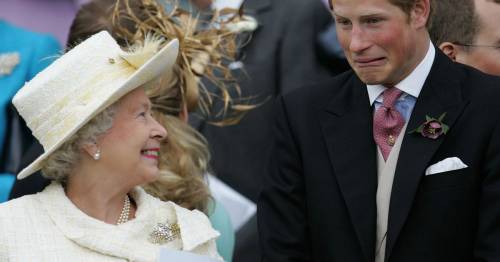 She's backed him through thick and thin – and Prince Harry left royal fans in no doubt this week about the huge respect he still holds for the Queen.

Announcing the birth of his daughter with Meghan Markle, the couple revealed their second child would be called Lilibet Diana Mountbatten-Windsor.

Inspired by Her Majesty's famous moniker, the name also pays tribute to Princess Diana, while one commentator also suggested there was a subtle nod to his mother-in-law, Doria.

The gesture has been questioned by some experts, who say it flies in the face of the Duke and Duchess of Sussex's recent high-profile criticisms of the Royal Family.

However, others have suggested it is a statement of intent about the couple's desire to heal the rift that has emerged since their decision to step away from royal duties and move to America.

And despite tensions with father Prince Charles and his brother Prince William, Harry has always insisted he has a "very good relationship" with his "colonel-in-chief" grandmother, who has supported him through the death of his mother, his marriage to Meghan and, yes, even Megxit.

Following the death of Princess Diana in 1997, the Queen was roundly criticised for a seeming reluctance to mourn in public – and raise the flag at half-mast at Buckingham Palace.

But privately, her love for her grandsons shone through, with the monarch going to great lengths to allow them to grieve privately. 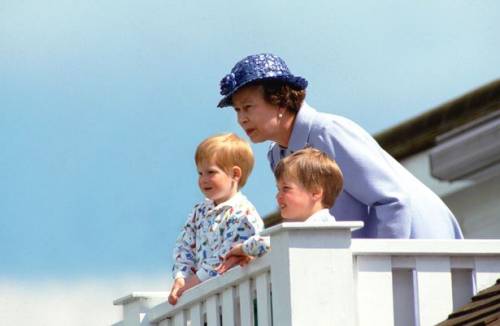 Upon hearing about the car crash just after midnight, she reportedly instructed staff to let the boys sleep in before breaking the tragic news.

According to Channel 5 documentary Diana: 7 Days that Shook the Windsors, she banned mentions of Diana at a church service the family attended that morning.

She also instructed staff to hide TVs and radios in Balmoral, where the children were staying, to shelter them from the constant news coverage.

Speaking ahead of the Queen's 90th birthday, Harry made clear how important her guidance was as he came to terms with the heartbreaking loss.

"Having lost my mother at a young age, it's been particularly important to me that I've had somebody like the Queen to look up to and who's been there and who has understood some of the more complex issues when you lose a loved one," he told Sky News documentary The Queen at 90.

"She's been incredibly supportive and I've really appreciated her guidance."

After years of high-profile romances and more than a few public scandals, Harry delighted fans when he went public with Meghan Markle.

No one was more pleased than the Queen, according to royal sources, who felt the Duchess would be a positive force in his life. 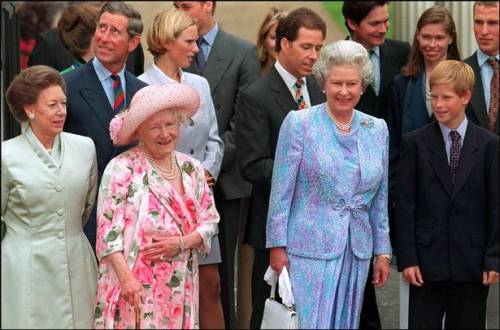 The Queen, Princess Margaret and Prince Harry attend a guard of honour at Clarence House in celebration of the Queen Mother's 97th birthday
(Image: AFP via Getty Images)

"Everything I heard from the sources I spoke to was that she really felt from the outset that Meghan was a positive person in Prince Harry's life," Katie Nicholl, author of Harry: Life, Loss and Love, told Entertainment Tonight.

"That she made him very happy and that she was really very supportive."

Harry returned the respect, asking his grandmother for her official blessing before proposing to Meghan in 2017. The Queen is said to have given it "without hesitation".

"I was told by one of the Queen's closest aides shortly after the engagement announcement that the monarch was genuinely delighted that Harry had found someone who made him so happy," Nicholl added.

"Despite rumours to the contrary, there was no issue over Meghan's racial heritage or concerns that she was older or divorced. Exceptionally close to her grandson, the Queen trusts Harry."

The pair's relationship, however, faced its biggest test when the Duke and Duchess revealed they were stepping back from royal duties and moving to Canada – later relocating to California.

Taking a hardline stance, the Palace finally confirmed in February that the couple would lose their patronages, with Harry being stripped of his honorary military titles.

According to the royal biography Finding Freedom, however, when Harry and Meghan first announced their intentions to the Queen last year, she took a conciliatory stance, inviting the prince to lunch on March 1 as he returned to the UK to finish his final royal duty.

An aide revealed there were "no titles" at the meeting, "just granny and grandson". They insisted that "the Queen was still one of the most important women in [Prince Harry's] life" and that as they "tucked into a roast lunch, the Queen made it clear to Harry that she would always support him in whatever he decided to do". 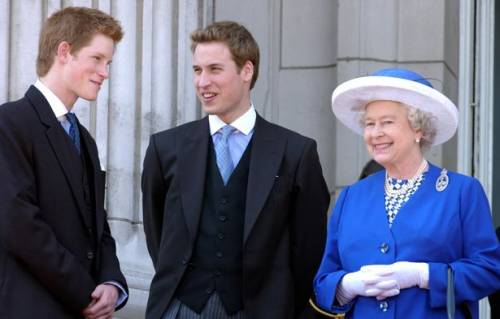 The Queen laughs with her grandsons at Buckingham Palace following the Trooping The Colour parade
(Image: Tim Graham Photo Library via Getty Images)

Tensions worsened following the Duke and Duchess' bombshell interview with Oprah Winfrey in March, which saw them accuse members of the Royal Family of racism and the institution of failing to support Meghan when she was suicidal.

A source told MailOnline: "The Queen has made it clear to senior advisers that she is united with Charles and William, and was disappointed with aspects of Harry and Meghan's interview."

The timing was particularly sensitive given the poor health of the Queen's husband, the Duke of Edinburgh, who passed away the following month at the age of 99.

Harry's relationship with Prince Charles was said to have reached "rock bottom" after he said his father and brother were "trapped" by the royal institution.

But sources told the Mirror's Royal Editor Russell Myers that he tried to put their grievances aside to support the Queen ahead of Prince Philip's funeral.

“He wrote a deeply personal note to his dad to try and set things straight but tensions are still running high and things haven’t exactly ironed out the way he had hoped," said the source.

“There had been a kind of unspoken agreement between everyone to park whatever has been on each person’s mind, and solely concentrate on supporting the Queen ahead of Prince Philip ’s funeral."

'She's my colonel-in-chief, right? She always will be'

As the dust settles on a tumultuous year, the Queen appears to be taking charge of healing the rift between Harry and the Royal Family.

The monarch has reportedly offered her grandson an olive branch by inviting him to lunch next month while he's in the UK for the Princess Diana statue unveiling. 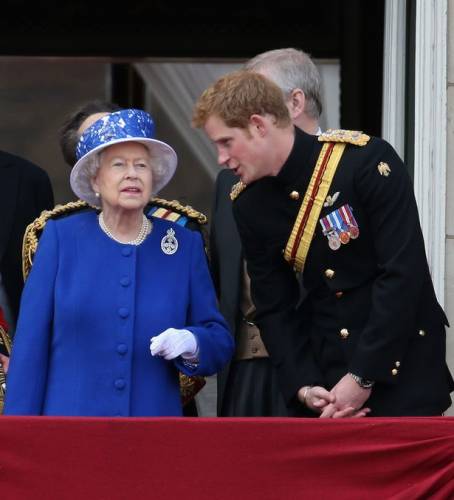 The Queen has reportedly invited Prince Harry to lunch ahead of an unveiling of the Princess Diana statue
(Image: Getty Images)

The informal meeting is understood to allow for her to "talk things through" with Harry following the birth of Lilibet.

A courtier told the Daily Mail: "It’s a typically magnanimous gesture by Her Majesty.

"The lunch will be a chance for them to talk things through."

And despite the hurt of Megxit, Harry said earlier this year that he was closer to his grandmother than ever, even talking over Zoom during the pandemic.

The Queen also shipped over a waffle-maker for her great-grandson over Christmas, with Harry telling James Corden's Late Late Show in February: "Archie wakes up in the morning and he just goes, 'Waffle?'"

He added: "I've spoken more to my grandmother in the last year than I have done for many, many years.

"My grandmother and I have a really good relationship. And an understanding. And I have a deep respect for her. She's my colonel in chief, right? She always will be."

Previous : China, ASEAN agree to avoid provocations in South China Sea
Next : Experts urge people not to share pictures of their vaccine card on social media