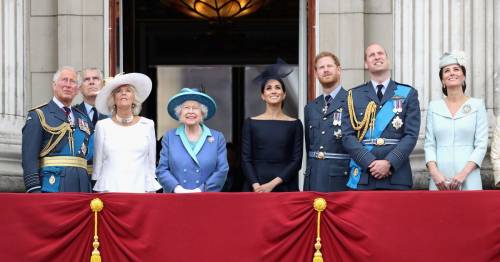 Prince Harry and Meghan told Queen they didn’t want to be on balcony, pal claims

Prince Harry and Meghan Markle told the Queen they didn't want to appear on the Buckingham Palace balcony for her Platinum Jubilee, according to a Sussex insider.

The Duke and Duchess of Sussex instead asked to attend the Queen's Thanksgiving Service, which is due to take place on Friday, June 3.

It has emerged the couple plans to bring their children Archie, three, and Lilibet, 11-months, when they return to the UK to join in the celebrations of the monarch's landmark 70 years on the throne.

The Queen has ruled that Prince Harry, Meghan, and even her own son Prince Andrew won't be able to stand beside her during the historic Trooping of the Colour parade after only inviting working royals on to the balcony.

But a friend of the couple says they were not axed from the regal guestlist, but asked for it themselves.

Omid Scobie, the pair's biographer and Finding Freedom author, said Harry discussed "with his grandmother about the possibility of not attending Trooping the Colour" long before the controversial announcement last week.

Scobie told Yahoo News, the Sussexes – who renounced their royal titles in 2020 before starting a new life in the US – deemed it "inappropriate" to appear on the balcony.

Instead, Prince Harry told his grandmother he was "keen" to be invited to her Thanksgiving Service at St Paul's Cathedral on the Friday.

But one royal expert says the couple's decision to return for the festivities is "entirely due to branding".

However, despite this, royal author and broadcaster Hugo Vickers says that their attendance at the celebrations is to ensure they maintain their royal brand.

The couple are bringing their two children, Archie, three, and 11-month-old Lilibet
(

He told True Royalty TV's The Royal Beat: "I think it’s entirely to do with branding because the further away that he [Harry] gets from the Royal Family, he turns into a guy in blue jeans, with a ginger beard, coming off a plane with a backpack on.

"Which isn't very marketable in my point of view.”

Meanwhile, Russell Myers, royal editor of the Mirror added: “I think they [The Sussexes] would have wanted to be on the balcony, of course.

"There is an argument to say that they still need to be seen as royal.

"This is one of the biggest events of the generation and they need to stay relevant.

"They’re not having a great time at the moment. There is pressure from Netflix, who have dropped Meghan’s debut show Pearl [and] I think they are potentially struggling to stay relevant.”

Earlier this week, it was reported that Prince William is reportedly "wary" about Harry's presence at the Queen's Platinum Jubilee next month amid concerns he will leak details of private conversations.

The Duke and Duchess of Sussex have been told that a Netflix film crew following them will be stopped by royal enforcers if they attempt to film the celebrations.

But William is reported to be fearful that the contents of any heart-to-heart talk with his younger brother at the special occasion could end up being made public on Harry and Meghan's show on the streaming service.

Previous : Oil giants’ profits for three months would be enough to give every household £450
Next : Three shootings injure 21 outside Milwaukee Bucks arena around Game 6 loss to Boston Celtics