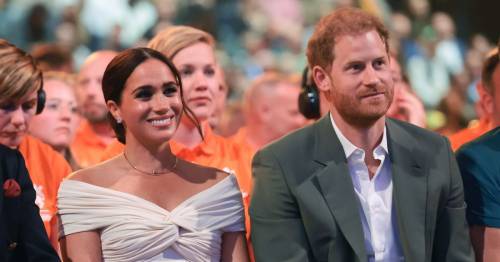 Prince Harry and Meghan Markle coming to Jubilee ‘for their brand’, says expert

Prince Harry and Megan Markle's return to the UK for the Queen's Platinum Jubilee celebrations is "entirely due to branding", a royal expert has claimed.

The couple, who stepped down as senior working royals in 2020, announced last week they would travel from their home to California to join in with the events on the first week of June.

Their children Archie, three, and 11-month-old Lilibet will also be joining them, with the Queen set to meet Lilibet for the first time since she was born last June.

News of their return came just minutes after it was announced they will not be on the Buckingham Palace balcony at the Trooping the Colour event after Her Majesty limited it to working royals only.

Harry and Meghan will be attending the Queen's Platinum Jubilee celebrations
(

However, despite this, royal author and broadcaster Hugo Vickers says that their attendance at the celebrations is to ensure they maintain their royal brand.

He told True Royalty TV's The Royal Beat: "I think it’s entirely to do with branding because the further away that he [Harry] gets from the Royal Family, he turns into a guy in blue jeans, with a ginger beard, coming off a plane with a backpack on.

"Which isn't very marketable in my point of view.”

The couple on the Buckingham Palace balcony in 2018
(

Meanwhile, Russell Myers, royal editor of the Mirror added: “I think they [The Sussexes] would have wanted to be on the balcony, of course. There is an argument to say that they still need to be seen as royal.

"This is one of the biggest events of the generation and they need to stay relevant. They’re not having a great time at the moment. There is pressure from Netflix, who have dropped Meghan’s debut show Pearl [and] I think they are potentially struggling to stay relevant.”

Earlier this week, it was reported that Prince William is reportedly "wary" about Harry's presence at the Queen's Platinum Jubilee next month amid concerns he will leak details of private conversations.

The Duke and Duchess of Sussex have been told that a Netflix film crew following them will be stopped by royal enforcers if they attempt to film the celebrations.

But William is reported to be fearful that the contents of any heart-to-heart talk with his younger brother at the special occasion could end up being made public on Harry and Meghan's show on the streaming service.

William and Harry have not met since they unveiled a statue of their mum Diana, Princess of Wales, in July last year.

A source told the Sun : “William wants to talk to Harry to try to heal the rift between them but he’s fearful it will find its way on to Netflix, Oprah or into Harry’s upcoming book.”

Previous : Professional witch says ‘spell’ has conjured money and a new home for her
Next : Filthy, disgusting ‘cell’ where cruel family locked dog inside covered in his waste