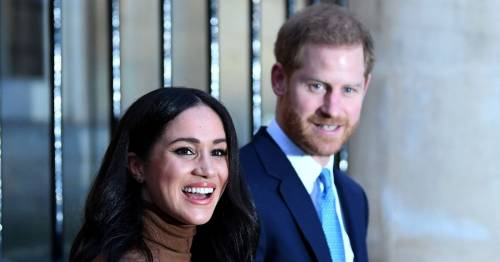 Prince Harry and Meghan Markle welcomed young daughter Lilibet in June – and since then have been settling into life as a family of four.

And today, along with older son Archie, they will be marking a major US holiday for the first time with the five-month-old – Thanksgiving.

Today families across the US will be gathering to celebrate the special day, and it will be the second year in a row that Harry and Meghan have spent the holiday in California.

In her recent interview on The Ellen Show, Meghan revealed that a chilled day at home cooking is what is in store for the couple today.

She told Ellen: "I love to cook, we'll be at home and just relax and sort of settle in.

"It's our second Thanksgiving at home in California, so it will be nice."

It seems that Meghan is a big fan of Thanksgiving, in 2016 shared a snap of her "perfect Thanksgiving turkey" on Instagram.

She explained she cooked in on the barbecue instead of in the oven in order to retain as much flavour as possible and create a crispy skin.

As well as this, she has also previously shared several Thanksgiving recipes on her now-defunct lifestyle blog, The Tig, including ideas for using up leftovers – one popular one was for turkey tortilla soup.

Thanksgiving in America also marks the start of the run-up to Christmas and speculation is already mounting if Harry and Meghan will return to the UK for the festive season.

However, one report has claimed they will not be coming to the UK to join the Queen for her first Christmas without the late Prince Philip.

The couple had reportedly been invited to join the rest of the royals at Sandringham for Christmas.

It would be the first chance for Royal Family to meet Lilibet, the Queen's namesake great-granddaughter.

Meghan and Archie have yet to return to the UK since they left for the US last year.

The Queen has faced a number of health concerns in recent weeks, after being hospitalised for a night in October and then having to cancel her appearance at the Remembrance Day service after spraining her back.

But a source told Page Six : “There’s a lot that goes into the logistics and the planning of the family Christmas, so of course, staff know that Harry and Meghan are not coming.

“If they were, they would have communicated it to their family by now.

“But this is Her Majesty’s first Christmas without her husband, so one would have hoped they would want to be with her.”

The Sussexes have not commented on the claims.