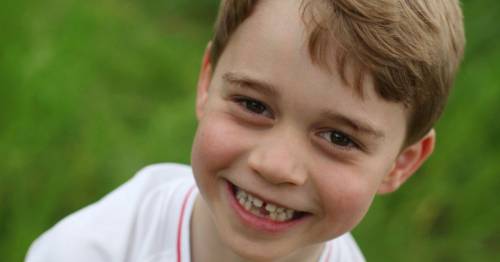 Prince George, eight, is someone in a unique set of circumstances for more reasons than one. Not only is he a member of an unbroken chain of monarchy that stretches back over 1000 years, but his entire life has already been mapped out for him.

George will one day join the likes of his great-grandmother, The Queen, and historic monarchs such as King George III and Queen Victoria and become succeed to the throne.

While it is now thought that the young royal is fully aware of the future that lies ahead of him, there are many who would like to know exactly when and how he found out.

According to the royal biographer Robert Lacey, Prince George would have only been told the news last year when he was seven-years old.

Lacey claims that The Duke and Duchess of Cambridge formulated a plan to deliver the truth to their eldest son so that he wouldn't find out accidently and be confused.

Prince William would have told Prince George about his destiny
(

The author wrote in an updated version of his book 'Battle of Brothers' that: " William has not revealed to the world how and when he broke the big news to his son.

"Maybe one day George will tell us the story himself. But sometime around the boy’s seventh birthday in the summer of 2020 it is thought that his parents went into more detail about what the little prince’s life of future royal 'service and duty' would particularly involve."

Lacey continued that William and Kate wanted to sit George down at a "controlled moment of their choice" at the age of seven.

Their decision was said to link to "William’s unhappiness at the haphazard fashion in which the whole business of his royal destiny had buzzed around his head from the start."

However, before the day that he comes to the throne arrives George will be a senior royal whose duty will be to support individuals and charities from all walks of life in the UK, the Commonwealth and around the world.

In terms of a formal education, Prince George will have lessons similar to those that his father and great-grandmother had.

During his school days at Eton College, young Prince William would walk up the hill and come for tea with the Queen at Windsor Castle and would be prepped for his future as king.

Lacey explained: "There has always been a special closeness between William and the Queen, and she has taken a particular interest in him.

"When William became a teenager, she would have him at Windsor Castle and would open the state boxes and guide him through the papers. It was William's constitutional education."

The Queen on the other hand had different schooling. It is said that she had an "aptitude for learning", but has never taken an academic exam in her life. She was instead educated in weekly lessons in the rules of constitutional monarchy by the vice provost of Eton College, Henry Marten.

Prince William has received monarch lessons from his grandmother
(

Prince William has spoken out many times and praised the influence his grandmother had over him as he grew up.

In an interview with Sky News in 2016 ahead of The Queen's 90th birthday, he said: "It's been particularly important to me that I've had somebody like the Queen to look up to and who's been there and who has understood some of the more complex issues when you lose a loved one.

"So she's been incredibly supportive and I've really appreciated her guidance."

Previous : Life of Queen’s uncle who was shut away from his family and died tragically young
Next : More than three in five homeowners say they were ‘winging it’ when they bought