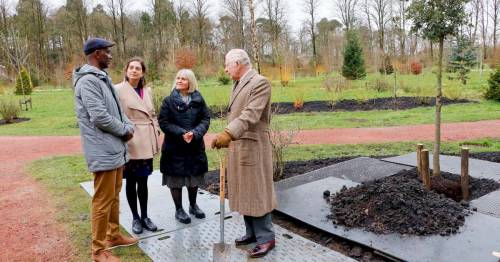 When Prince Charles touched down on Rwanda’s red soil last night, he became the first member of the Royal Family ever to do so.

Yet, although it is his first visit to the land of a thousand hills, he and the beautiful country have become awkwardly interlinked in recent weeks.

His reported criticism of the British Government’s contested scheme to fly migrants there as “appalling”, now delayed by a ruling of the European Court of Human Rights, sparked a constitutional row.

When he finally begins his completely coincidental work there today, representing the Queen at the Commonwealth Heads of Government summit, eyebrows may rise.

But behind the furore, one man hopes the Prince will shine his spotlight on to values every government could learn from: tolerance, reconciliation, unity.

Eric in the yellow t shirt as goalkeeper in the 90s

Behind the scenes, Eric Murangwa, a survivor of the 1994 genocide against the Tutsi in Rwanda, has, through a chance conversation, steered important elements of the Prince’s visit.

It all began with a tree, planted commemoratively to mark the 28th anniversary of the genocide with the Prince at Dumfries House in Ayrshire, Scotland, in April.

Over soil and branches, Eric advised him to make time to learn when he visited the African country and to visit a church memorial where some 50,000 victims lie buried, slaughtered amid the civil unrest in which the Hutu majority of Rwanda killed Tutsis simply because of their ethnic minority.

Most importantly, he advised him to speak to Tutsi survivors and Hutu perpetrators in special villages of reconciliation.

Here they live, against all human instinct, side by side. Eric wanted Prince Charles to see first-hand what tolerance in the most unimaginable circumstance possible, can look like. “Straight away he seemed to be moved,” says Eric, 46. “He did not think this could be possible.”

What the Prince does not know, is that while he learns on Eric’s advice, Eric will also be in Rwanda, on his own mission of understanding.

While Prince Charles learns about forgiveness, Eric plans to exercise it.

He lost 85 members of his extended family in the genocide, including 30 close to him.

The only known image of Irankhunda Jean-Paul

Kind, thoughtful, close to his mother, he was just seven. Eric’s own story of survival, astonishing and chilling, was decided by his job at the time, as goalkeeper and captain of the national football team.

Although a Tutsi, his life was saved because his would-be killers turned out to be football supporters.

Later, he survived because his Hutu team-mates protected him, and finally, he lived because the director of his football club, Jean-Marie Vianney Mudahinyuka, sheltered him because he was his favourite player.

Incongruously, the Hutu militia leader still killed and raped many, many others, and remains in prison for his crimes.

With his foundation, the Ishami Foundation, which uses youth football to promote unity, Eric plans to gather wide testimony from survivors and perpetrators as part of a project for the Holocaust Memorial Day Trust.

He will also try to coax a meeting with some of those directly involved in his own family’s killings, as well as Mudahinyuka, who has previously refused to see him.

Quietly but firmly, he explains: “I haven’t met anyone who was involved in the killings of my family – it will possibly be the first time. I am ready for that, I am prepared. I have already forgiven them. You can’t encourage others to forgive and buy into reconciliation when you haven’t done it yourself.”

When it comes to Mudahinyuka, he wants to understand.

“What he did for me, it counts for very little given the terrible things he has been found guilty of,” he says. “Why did he protect me when he was going out and killing other people?”

An estimated 800,000 people were slaughtered in just 100 days by Hutu extremists, seeking to exterminate the Tutsi ethnic minority here following the assassination of the country’s president, a Hutu, which extremists blamed on the Tutsi Rwandan
Patriotic Front.

Years of discrimination and mistrust had sowed the seeds.

Eric recalls vividly the day the Hutus first came for him on April 7, 1994, the day after the assassination. All hell had let loose in Kigali, the capital.

It was afternoon, he was home. They came in, heavily armed, they were screaming, shouting, and then one of them recognised who I was,” Eric recalls. “A photo album fell wide open in front of him, he looked at the picture and stared back at me.

“In that moment everything changed. We spoke about football for the next 10 minutes… It was crazy, but it happened.”

The next day, Eric fled to Hutu team-mates for safety. They protected him, and because he, a celebrity viewed as the head of the family, was spared, so were his parents.

But when that protection finally faltered the following month, they approached Mudahinyuka for support.

After giving him a home for a few days, he arranged for Eric to be transported to the International Red Cross, from where he found refuge in Kigali’s Hotel des Mille Collines, along with hundreds more.

The story was later dramatised in the 2004 film Hotel Rwanda.

Eric finally escaped Rwanda during a stopover with his team in Paris on the way back from a World Cup
qualifier in Tunisia.

After applying for asylum in Belgium, he flew to the UK in 1997. Here, he set up his foundation and has been awarded a MBE. But his celebrity could not protect all his family.

When the killings began, Eric’s little brother had been sent away for an Easter holiday break to stay with an uncle who worked at a hospital on the other side of the city.

The hospital became a refuge for Tutsis, but Hutu militia stormed it. The little boy was killed.

Eric confides, slowly, there is just one existing image of his brother.

The hospital had European doctors on its staff, and France and Belgian sent in soldiers to rescue them – only them. A Belgian documentary filmmaker came, too.

The resulting film, Ghosts From Rwanda, contains an image of his brother amid a distraught crowd, lost, terrified. He looks like Eric.

“It’s a horrible thing to see but it is the only image of him we have,” says Eric. This week Eric will visit a memorial at that hospital.

Previous : GP crisis ahead with mass exodus of 19,000 doctors predicted in next 5 years
Next : Treasure hunter’s claim of looted Nazi gold hidden on sunken U-boat to be probed – World News