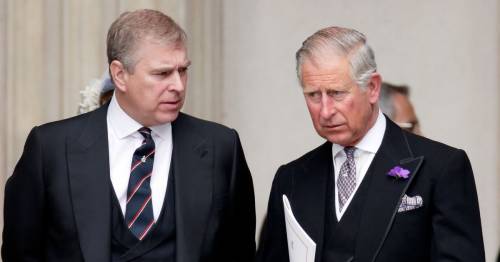 Prince Charles remained silent over a question about Prince Andrew during a visit to assess Storm Arwen damage.

The Prince of Wales was unwilling to comment on the ongoing legal battle the Duke is embroiled in with his accuser Virginia Giuffre.

It comes after a judge decided he would have to face a civil trial on sex abuse allegations.

Prince Charles was visiting the Haddo Country Park, Ellon, Aberdeenshire when Sky News correspondent James Matthews asked: "Can I ask your view on your brother's position?"

Charles during his visit to Haddo Country Park, Ellon, Aberdeenshire, to view the devastation caused by Storm Arwen
(

The heir to the throne ignored the question and chose to speak ot individuals affected by Storm Arwen in November.=

Royal experts have claimed the family is "absolutely furious" with the Duke.

Angela Levin said if the Queen sought advice from Charles and William, they would have been very firm on the matter.

"Whatever he may or may not have done he certainly was a friend of Epstein and invited him to parties, royal parties when they knew he had been accused of having relationships with underage girls.

"So there’s no doubt about that. I would imagine that this time the Queen would also listen to her aides."

Yesterday, it was announced Prince Andrew has been stripped of his military affiliations and royal patronages by the Queen and as a royal source claims he will never return to official duties.

Yesterday, it was announced Prince Andrew has been stripped of his military affiliations and royal patronages by the Queen
(

Prince Andrew during his interview with BBC Newsnight's Emily Maitlis
(

The disgraced Duke of York will no longer use the title of His Royal Highness in any official capacity as he fades away from public life.

"The Duke of York will continue not to undertake any public duties and is defending this case as a private citizen.

Prince Andrew served in the Royal Navy as a helicopter pilot and saw active service in the Falklands War.

Virginia Giuffre claims Andrew's pal Jeffrey Epstein forced her to have sex with the royal. The Duke of York vehemently denies the allegations
(

The royal said he stopped sweating after suffering an 'overdose of adrenaline' while being shot at in the conflict.

The Duke revealed this medical condition in a BBC Newsnight interview when addressing Ms GIuffre's description of him sweating profusely.

Previous : Inside the famous hidden nudist resort where 50 people live in tents without clothes
Next : In rare move, Uruguay opens borders for residents infected with COVID-19