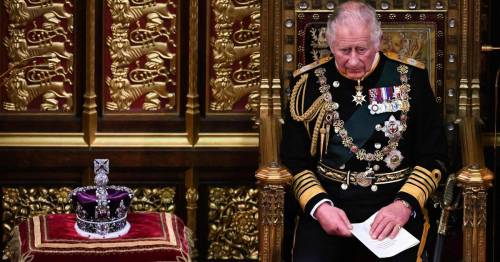 Prince Charles gave a glimpse of his future role as monarch and head of state when he opened Parliament in the absence of the Queen.

After the monarch pulled out of the event due to mobility issues, it was down to the heir to the throne to read the Queen's speech for the first-time ever.

Many royal commentators hailed the moment as a "big one" on royal history.

Joe Little, managing editor of Majesty magazine, said: "It must have been a hugely significant moment for him. As people have been saying today, we’re looking at the future."

So what might the monarchy look like under Charles and what will change when he becomes King? Here we take a look…

Prince Charles at the State Opening of Parliament
(

Charles's plans for a slimmed down monarchy when he takes the throne are well known, and he's reportedly looking to have a team of seven senior royals.

Royal author Angela Levin told talkRADIO : "Prince Charles has wanted for a very long time to cut the monarchy down to save costs and to make people be worth the money that they got from the taxpayer.

"I imagine that might be when Harry and Meghan are ditched from being members of the Royal family.

"I think the outer edge, which the Queen has wanted to keep together for a very long time for sentimental reasons, which at her age she didn't really particularly want change which I think is understandable.

A line-up of royals at Windsor Castle in December 2020
(

"But he wants to change and I think he will do that."

The first steps for a small senior royal team are already in place, and the Queen revealed her new team of senior royals at Christmas 2020.

Her 'New Firm' featured Charles, Camilla, Princess Anne, the Duke and Duchess of Cambridge, Prince Edward and Sophie Wessex, and they came together for a reunion photo at Windsor Castle after the Covid lockdown.

Charles and wife Camilla with Prince Harry and Meghan Markle
(

With plans for a slimmed-down monarchy, it does mean there are several royals who will reportedly miss out on being part of it.

Among them are Prince Harry and Meghan Markle – although they chose to step down as senior working royals two years ago to move to America and carve out a new life in California.

There will also be no place for Prince Andrew nor reportedly his daughters Princess Beatrice and Princess Eugenie – although they are not working royals at the minute.

Charles has already stepped in to control Princesses Beatrice and Eugenie's spending, which reportedly caused a huge row with Prince Andrew.

A report published after Eugenie's gap year revealed she spent more than £100,000 of taxpayers' money as she explored India, America, Thailand and South Africa.

She paid for hotels and travel herself, but the massive security bill, including overtime money, was funded by the taxpayer.

Charles reportedly stepped in to control the spending, with author Angela Levin telling the Channel 5 documentary Beatrice and Eugenie: Pampered Princesses? he suggested Eugenie and Beatrice didn't need costly security as it's unlikely they will ever become working royals.

Ms Levin added: "Prince Charles decided that as they were not likely to be very senior royals, that this was too much for the public to pay, so he stopped that. Prince Andrew was so angry that he wrote a note to the Queen. He said he wanted them to be considered as proper royals. He did not want the protection officers to leave them."

Charles with wife Camilla at the State Opening of Parliament
(

One royal who is set to get a new title when Charles is King is his wife Camilla, who will be known as Queen Consort.

When Camilla married into the Royal Family in 2005, it was announced at the time that when Charles becomes monarch, Camilla would not take the title of Queen.

Instead, it was confirmed that she would instead be known as "HRH The Princess Consort".

Public opinion of Camilla was previously not favourable due to her relationship with Charles when he was married to Princess Diana.

However, in February, on the eve of her Platinum Jubilee, the Queen declared that Camilla can take the title Queen – in an “extraordinary” gesture hailed by royal watchers.

In a message to the nation, the Queen wrote: “When, in the fullness of time, my son Charles becomes King, I know you will give him and his wife Camilla the same support that you have given me.

“And it is my sincere wish that, when that time comes, Camilla will be known as Queen Consort as she continues her own loyal service.”

A spokesman for Charles said: “The Prince of Wales and the Duchess of Cornwall are touched and honoured by Her Majesty’s words.”

William and Kate with Charles and Camilla
(

However, Camilla won't be the only one in line with a new title when Charles takes to the throne.

He may choose to bestow the Prince of Wales title on his eldest son Prince William. And when his titles change when Charles becomes King – so will Kate's.

If William becomes Prince of Wales, Kate will be entitled to be the Princess of Wales – a title previously held by her late mother-in-law Diana.

Another change that could be on the cards when Charles takes the throne is reportedly the opening up Buckingham Palace.

In a bid to slim down the royal estate when he ascends to the throne, it has been reported that he will live in little more than “ a flat above the shop” at Buckingham Palace and use Highgrove as his family home.

It is also understood that William and Kate will move to Windsor Castle, a relocation that the couple is said to want.

Royal expert Camilla Tominey said in the past there had been some negative publicity surrounding the more minor royals seemingly living in family accommodation and seemingly not doing much.

In an episode of The Telegraph’s Royal Insight, she said: ""There's this sense that he wants a slimmed down monarchy to make sure that everybody is doing their bit and [there are] no so-called hangers-on."