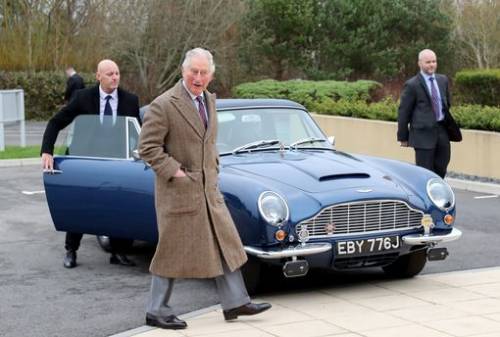 In their world of chauffeured cars and exclusive travel, it would seem the royals still enjoy getting themselves around. Whether it’s a Range Rover or a sports car, everyone from the Queen to Prince William have been frequently spotted behind the wheel.

Very few of us need reminding that driving has numerous negative effects on the environment, and it would appear that one royal is right on the pulse of this issue.

Prince Charles has spent the last five decades campaigning for climate change and urging the planet to become as green and as environmentally friendly as possible.

While the Queen is often seen driving herself around in the highlands of Scotland or around the Sandringham Estate in Norfolk, The Prince of Wales, 73, can usually be found in his classic blue 1970 Aston Martin.

The car continues to be used by the prince today after it was gifted to him by the Queen for his 21st birthday back in 1969.

Prince Charles got his beloved Aston Martin in 1969
(

Prince Charles has driven the car himself to many official engagements but the amount of fuel the engine guzzled was a huge concern for him.

He had the car converted to run on bioethanol made from wine and cheese back in 2008. Engineers at Aston Martin discovered that their cars could run on surplus English white wine mixed with whey.

According to The Telegraph they are said to have urged the prince not to switch out his fuel.

Prince Charles said: "The engineers at Aston said, 'Oh, it’ll ruin the whole thing,' I said, 'Well I won’t drive it then,' so they got on with it and now they admit that it runs better and is more powerful on that fuel than it is on petrol… And also, it smells delicious as you’re driving along."

The car was also used by the Duke and Duchess of Cambridge to drive away from Buckingham Palace to Clarence House after their 2011 wedding. The back license plate was swapped out for one that read ‘Just Wed’ and various helium balloons were tied on at the back.

But this wasn’t the only time that Prince Charles eyed up improving royal transport. In 2007, it was reported that the Queen’s royal train was trialled to run on vegetable oil. Prince Charles explained: "It took me a long time to battle to get them to run it on used cooking oil."

He continued: "Which actually, in the end, worked quite well." But the maintenance workers might quibble with that, he admitted, adding: "They say it clogs up the engine or something."

Prince Charles has dedicated huge amounts of effort to speak about the environment- largely through his beliefs in the importance of organic farming. He even launched his own sustainable market initiative, Terra Carta, in 2020.

The Queen also took the opportunity to congratulate the pair in her Cop26 speech.

Making reference to the late Prince Philip's dedication to the environment, Her Majesty said: "It is a source of great pride to me that the leading role my husband played in encouraging people to protect our fragile planet, lives on through the work of our eldest son Charles and his eldest son William. I could not be more proud of them."

Previous : ‘Secret tunnel’ rumoured to run all the way from palace to brothel under London
Next : Jake Dennis on the change Formula E needed, learning Monaco and the perfect track