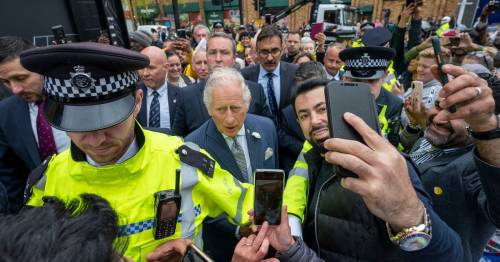 Prince Charles caused chaos at one of the capital’s best known street markets when he staged a walkabout with the chancellor Rishi Sunak.

Hundreds of people gathered by East Street market off the Walworth Road to catch a glimpse of the prince as he greeted well-wishers during a visit to meet young people who have benefited from a job creation scheme supported by the Prince’s Trust.

To shouts of “God bless you, Prince Charles!” and “How’s your mum?” he was immediately surrounded by a throng of people all brandishing mobile phone cameras or trying to shake his hand.

“Thank you for stopping by!” shouted one woman as police stopped the traffic to let Charles cross the road to shake hands with the crowd.

Amid the melee he asked one woman if she was trying to do some shopping.

The focus of the visit was on the local branch of JD Sports, where a sign on the shop front proclaimed: “The King of Trainers.”

Charles was there to meet young people who have been on the £2 billion Kickstart scheme, which was set up by Sunak during the pandemic to stave off mass youth unemployment.

It gave financial support for employers to recruit young people at risk of long-term unemployment by offering them a six month paid work placement.

Chatting against a backdrop of tracksuits and trainers, he seemed particularly interested in how many had found jobs at the end of the six-month programme.

The Kickstart Scheme was set up in September 2020 by Mr Sunak to provide work for young people, after youth unemployment peaked at around 15% in the pandemic.

“Are you now working in the store?” Charles asked one young man who has been on the scheme. “Is it all these sort of endless sports things? Do you get anything free?”

No, he was told: but there are staff discounts.

“It’s my first job, I’ve been doing it for three months,” said another young man. “And it hasn’t put you off?” laughed Charles.

When the man told him he had done his A levels at sixth form college, Charles said: “You got them all right? It’s a lot of hard work, isn’t it? I’m so glad that I don’t have to do those exams any more.”