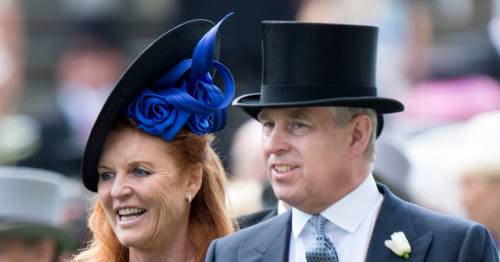 Throughout Prince Andrew's legal woes, one constant supporter in his corner has been his ex-wife Sarah Ferguson.

The pair split over 30 years ago, with their divorce finalised in 1996, but the couple is known for having an unconventional relationship.

Just last month, Sarah appeared on an Italian talk show where she said she stood by Andrew 100 per cent and explained that they share a love unlike any other.

And previously, their unusual relationship has even seen them forced to deny they had got back together.

Sarah once told the Daily Mail: "We're the happiest divorced couple in the world. We're divorced to each other, not from each other."

Here we look at their unique relationship…

Wedding and then divorce

Andrew and Sarah had been friends since they were children but it wasn't until 1985 that they started dating after being seated together at Royal Ascot that year.

They got engaged nine months later on February 19, 1986 – his 26th birthday – and Andrew gave his wife-to-be a ruby engagement ring.

Their wedding was a grand affair at Westminster Abbey and afterwards, they shared a kiss on the balcony of Buckingham Palace.

Andrew and Sarah on their wedding day in 1986
(

They welcomed their first daughter Princess Beatrice in 1988 followed by Princess Eugenie in 1990.

But cracks had begun to appear in their relationship as Andrew's naval career saw him away from the family for long periods of time. And in 1991 they split with their divorce finalised in 1996.

Speaking to US TV host Ernie Manouse in 2010, Sarah said: “My deal was that I was marrying my man, who happened to be a prince and a naval officer.

“But what I got was not the man, I got the palace and didn’t get him… and the courtiers told me I had to go to Buckingham Palace and he had to go to sea.

Andrew and Sarah with their oldest daughter Princess Beatrice
(

Despite their split over 30 years and the fact that their daughters are now both in their 30s, Sarah and Andrew continue to live together at Royal Lodge in Windsor when she is in the UK.

Speaking to the Sunday Times last year, Sarah said: "I travel a lot and I’ve always been able to make wherever I am home. If I am staying in a hotel I have the same family photographs and scented candles around me.

"When I’m in the UK I’m lucky enough to stay at Royal Lodge. I wouldn’t call it my home as that would be presumptuous."

Andrew and Sarah together at Royal Ascot in 2019
(

In 2019, Sarah and Andrew enjoyed a getaway to Bahrain with Beatrice and her now-husband Edoardo Mapelli Mozzi.

At the end of a series of official engagements in the country she and Andrew attended the Bahrain Grand Prix. This prompted rumours that the couple had rekindled their relationship.

And a senior Palace source told the Mirror: "While Duke and Duchess are not officially back together, it is fair to say their relationship is incredibly strong.

"The two of them are not involved in relationships with anyone else, which of course likely to fuel rumours of an unlikely reunion.

"They very much enjoy each other's company and their public displays of affection for one another are becoming more frequent.

"But for now they are enjoying spending time together and as a family."

'Never really left each other'

Before the denial, in 2000 Sarah even claimed she and Andrew had thought of remarrying but said the late Prince Philip wouldn't allow it.

And in 2010 she admitted that if they had their time again, they would stand up to those who pushed them apart.

She said: “Both Andrew and I… both of us say now if we could go back we would definitely play it differently and we should have learnt how to play the chess game differently.

“And maybe we have still been together because we would have said ‘no ‘to being separated just after our wedding.”

In 2017 she also set tongues wagging when she told an Australian radio show that they "never really left each other".

But in an appearance last August on ITV show Loose Women, she swerved a question about a romantic reunion with her ex-husband.

Sarah and Andrew with the Queen and Prince Philip in 1986
(

Panellist Jane Moore asked her: "You are the happiest divorced couple they have ever seen! So, any chance of a rekindling of romance there?"

Sarah responded: "Oh goodness me! You're all fairytale, you've all got your wands out!

"Andrew and I remain steadfast. In the past, we've been co-parenting, and now we're co-grandparenting."

The couple have two daughters – Beatrice and Eugenie
(

In August last year, it was revealed that Andrew was being sued by a victim of paedophile billionaire Jeffrey Epstein, who alleges he had sex with her three times after being trafficked at 17.

The Duke vehemently denies the allegations and had been trying to have the civil case in the US thrown out before it can go to a trial.

But yesterday a judge ruled the case could proceed despite Andrew's objections, which means the Queen's second son is facing the prospect of an immensely damaging and costly court case in his future.

Sarah came out in support of Andrew and last month told Italian talk show Porta a Porta this month: "I completely stand by Andrew 100 per cent.

"He is such a kind, great man, he is a brilliant father and now a fantastic grandfather…

"I feel very strongly that in this day and age that we must stand by our hearts, what we think is right with integrity and honour and loyalty."