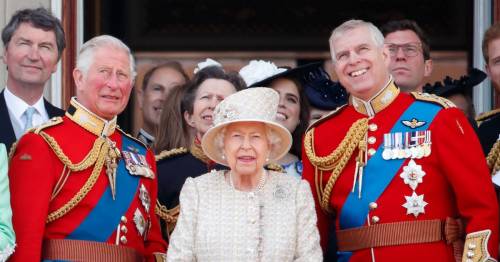 Prince Andrew was told he was being stripped of his military associations and patronages in a 30-minute meeting with the Queen, sources say.

The Duke of York received just two hours notice about the face-to-face midday meeting with his mother on Thursday.

He is no longer allowed to use His Royal Highness in any official capacity, although he will retain his military rank as Vice Admiral.

The Queen took decisive action against her son after a US judge ruled a sex abuse lawsuit against Andrew could go to trial.

Prince Andrew fears he faces “financial ruin” over the case, amid mounting legal bills and a potential £10million settlement with his accuser Virginia Guiffre, it has emerged.

Andrew has been left to fight allegations of rape after Her Majesty, with advice from future kings Prince Charles and Prince William, banished him from royal life forever.

The monarch and her heirs decided to cut him adrift after becoming “infuriated” with the crisis threatening The Firm, it is understood.

The Prince of Wales today refused to acknowledge a reporter’s questions on his brother’s “situation”, during a visit the Haddow Country Park in Aberdeenshire.

The Mirror can reveal that Andrew was today locked in talks with his teams of lawyers in the UK and US as they waited for Ms Guiffre’s team to respond to a 6pm deadline about her living arrangements.

The Mirror understands the Queen “would not assist” her son in paying a settlement to Ms Guiffre due to the perceived reputational damage to the Crown.

Sources have suggested the Queen would privately meet the cost of her son’s £300,000 annual security bill if he is left broke.

Palace insiders suggested that although such a decision has not been rubber stamped, were it to be rubber stamped it would be likely to cause further friction within the family after Prince Harry and his wife Meghan after they were cut adrift and told to pay for their own security when they quit their royal roles.

A spokesperson for the Duke of York did not comment.

Previous : Revellers in PM masks down alcohol and chant ‘this is a work event’ outside No10
Next : Andy Murray laments “unfortunate” situation as Novak Djokovic has visa cancelled again