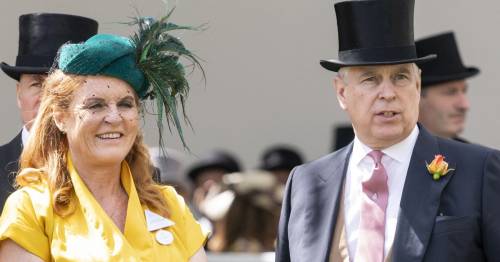 Sarah Ferguson will remain a duchess, despite her husband being stripped of his HRH titles and honours by the Queen, according to reports.

The Duke of York’s former wife is said to have no intention of ditching her title, which she has retained since their divorce.

Earlier this week it was announced that Prince Andrew, mired in sex abuse claims and now facing a civil trial, has been stripped of his military affiliations and royal patronages.

The disgraced Duke will no longer use the title of His Royal Highness in any official capacity and is expected to fade away from public life forever.

But friends of Sarah told the Daily Mail she had held the title of duchess since her divorce from Andrew and “that is how it will stay”.

"Andrew is still the Duke of York, so it is not an issue,” they said.

Prince Andrew, mired in sex abuse claims and now facing a civil trial, has had his military affiliations and royal patronages stripped away by the Queen
(

Prince Andrew became Duke of York, a title typically reserved for the monarch’s second son, upon his marriage to Fergie in 1986.

Although Fergie divorced Andrew over 30 years ago, back in 1996, she is able to continue using the title until she marries someone else. At that point, she would lose it.

Fergie, whose Twitter handle is SarahTheDuchess, has used her title to promote her books and other products around the world.

Another friend of the duchess said Sarah had “absolutely no intention” of shrinking away from the limelight.

The comments come as the royal family is said to be ‘furious’ with the prince over sex claims and dragging the family into disrepute.

The stripping of Andrew’s titles comes after a judge decided he would have to face a civil trial on sex abuse allegations.

Facing a potentially damaging and costly court trial, the Queen's second son must decide whether to fight the case, settle, or become a debt fugitive.

The wedding of Prince Andrew, Duke of York, and Sarah Ferguson in July 1986
(

If Prince Andrew wishes to settle, he must first ensure he has the finances to do so on top of his spiralling legal bills.

The Mirror revealed the Queen "would not assist" in any further financial settlement to Ms Giuffre over the sex allegations.

A source said he is meeting all the costs himself and if there was the potential to settle, "it is in no doubt that the Queen would not assist him in doing so."

The Duke, who lives at the Queen's Royal Lodge in Berkshire, is currently in the process of selling his £17 million Swiss chalet.

Princess Beatrice and Princess Eugenie, who were recently pictured on holiday in Switzerland, are believed to still be fully behind their dad.

Just last month, Sarah appeared on an Italian talk show where she said she stood by Andrew 100 per cent and explained that they 'share a love unlike any other'.

She once told the Daily Mail: "We're the happiest divorced couple in the world. We're divorced to each other, not from each other."

Previous : Woman tests out ‘worst McDonald’s in UK where burgers are like cardboard’
Next : Andy Murray snubbed millions to play in Saudi Arabia amid country’s human rights issues