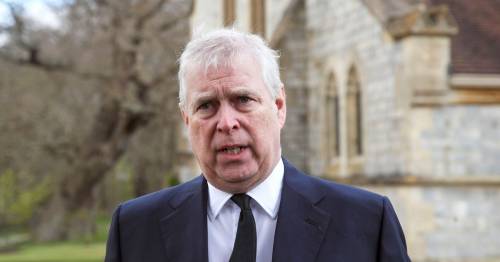 Prince Andrew ‘unsurprised’ by sex case ruling and will defend himself, claims source

Prince Andrew is said to be 'unsurprised' by the sex case ruling against him, but says it will be a 'marathon not a sprint'.

Judge Lewis Kaplan ordered a trial over Virginia Giuffre's claims that the Duke of York abused her when she was trafficked by paedophile financier Jeffrey Epstein.

Andrew's legal team had argued that the case should be dismissed as he denies all allegations against him.

Epstein and Ghislaine Maxwell, who was convicted of child sex trafficking crimes last month, forced the then 17-year-old into having sex with Andrew, Ms Giuffre claims.

A source close to the Duke said: "Given the robustness with which Judge Kaplan greeted our arguments, we are unsurprised by the ruling.

"However, it was not a judgement on the merits of Ms Giuffre’s allegations. This is a marathon not a sprint and the Duke will continue to defend himself against these claims."

It comes as Prince Andrew has been stripped of all his military titles and royal patronages by the Queen and as a royal source claims he will never return to official duties.

The disgraced Duke of York will no longer be able to His Royal Highness as he fades away from public life forever after a judge decided he would have to face a civil trial on sex abuse allegations.

"The Duke of York will continue not to undertake any public duties and is defending this case as a private citizen.
A Royal source said: "All of The Duke’s roles have been handed back to The Queen with immediate effect for redistribution to other Members of the Royal Family – will not return to The Duke of York.

"The Duke of York will no longer use the style ‘His Royal Highness’ in any official capacity."

US District Judge Lewis Kaplan made his ruling after a video conference hearing with representatives for the Queen's son. The prince was not present.

Outlining his reasons for denying the Duke of York's motion to dismiss the civil case against him, the judge said an agreement in the civil settlement between Epstein and Ms Giuffre "cannot be said" to benefit him.

In his ruling, he said: "The 2009 Agreement cannot be said to demonstrate, clearly and unambiguously, the parties intended the instrument 'directly,' 'primarily,' or 'substantially,' to benefit Prince Andrew.

"The existence of the requisite intent to benefit him, or others comparable to him, is an issue of fact that could not properly be decided on this motion even if defendant fell within the releasing language, which itself is ambiguous.

"Thus, independent of whether the release language applies to Prince Andrew, the agreement, at a minimum, is 'reasonably susceptible to more than one interpretation' on the equally important question of whether this defendant may invoke it."

The Duke's relationship with his former billionaire pal Epstein stems back to 1999 when he was reportedly introduced to him through Maxwell.

Andrew had been a friend of Maxwell's since her time at the University of Oxford.

The royal flew alongside Epstein on his private jet in February 1999, when he is believed to have travelled to the financier's private island Little St James in the US Virgin Islands.

The royal invited both Epstein and Maxwell to the Queen's Dance of the Decades event at Windsor Castle in June 2000.

Previous : Novak Djokovic slammed for ‘playing by own rules’ by fellow Australian Open contender
Next : ‘Workers and communities pay the price while executives protect their bonuses’