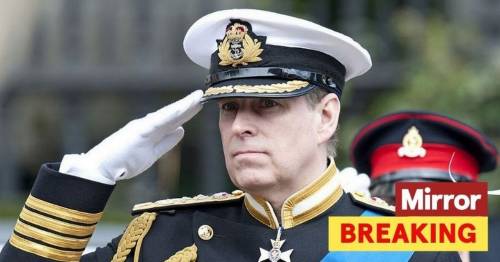 Prince Andrew has been stripped of all his military titles and royal patronages by the Queen and will never return to official duties.

The disgraced Duke of York will no longer use the title of His Royal Highness in any official capacity as he fades away from public life forever.

His military titles and royal patronages will be redistributed among other members of the royal family.

It comes after a judge decided he would have to face a civil trial on sex abuse allegations.

"The Duke of York will continue not to undertake any public duties and is defending this case as a private citizen.

A royal source said: "All of The Duke’s roles have been handed back to The Queen with immediate effect for redistribution to other Members of the Royal Family – will not return to The Duke of York.

"The Duke of York will no longer use the style ‘His Royal Highness’ in any official capacity."

Prince Andrew served in the Royal Navy as a helicopter pilot and saw active service in the Falklands War.

The royal said he stopped sweating after suffering an 'overdose of adrenaline' while being shot at in the conflict.

The Duke revealed this medical condition in a BBC Newsnight interview when addressing Ms GIuffre's description of him sweating profusely.

He is also Royal Colonel of the Royal Highland Fusiliers, Honorary air commodore of RAF Lossiemouth, Commodore-in-chief of the Fleet Air Arm.

Veterans of the Royal Navy, RAF and Army shared their upset over Andrew's retention of his titles in an open letter to the Queen earlier today.

Her Majesty's decision to strip him of his military titles comes after a US judge ruled on Wednesday that Ms Guiffre's case against the royal could proceed despite his attempts to have the civil case thrown out before trial.

Responding to the ruling, a source close to the Duke said: “Given the robustness with which Judge Kaplan greeted our arguments, we are unsurprised by the ruling.

"However, it was not a judgement on the merits of Ms Giuffre’s allegations. This is a marathon not a sprint and the Duke will continue to defend himself against these claims.”

Facing a potentially damaging and costly court trial, the Queen's second son must decide whether to fight the case, settle, or become a debt fugitive.

If Prince Andrew wishes to settle, he must first ensure he has the finances to do so on top of his spiralling legal bills.

The Mirror revealed the Queen "would not assist" in any further financial settlement to Ms Giuffre over the sex allegations.

A source said he is meeting all the costs himself and if there was the potential to settle, "it is in no doubt that the Queen would not assist him in doing so."

1982. Prince Andrew (later the Duke of York) in the Falklands with a camera
(

The Duke, who lives at the Queen's Royal Lodge in Berkshire, is currently in the process of selling his £17 million Swiss chalet.

Princess Beatrice and Princess Eugenie, who were recently pictured on holiday in Switzerland, are believed to be fully behind their dad.

Previous : U.S. envoy warns of escalation amid ‘drumbeat of war’ in Russia tensions
Next : Overweight pup sheds more than 5 stone after fears he was too fat to survive