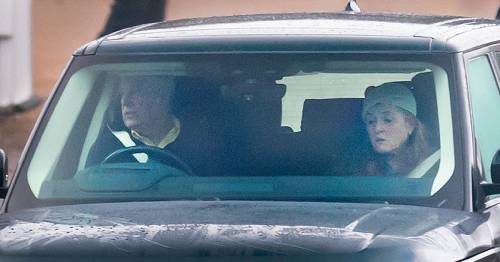 Prince Andrew and ex-wife Sarah Ferguson have been spotted together for the first time since he was stripped of his royal and military titles by the Queen.

The former married couple who remain close despite their divorce in 1996, were seen driving from Royal Lodge, his residence in the grounds of Windsor Great Park in Berkshire.

The Queen decided to strip her son of his titles as the legal case being brought by Virginia Guiffre over sexual assault allegations presses on in New York.

Earlier in the week more than 150 war veterans had written a strongly-worded public letter to the Queen calling for her to strip her son of his titles.

The service personnel, who said they were proud to fight for their country, said it would be "inconceivable" he would remain in post if it were "any other senior military officer".

The pair drove from Royal Lodge
(

The letter read: "Officers of the British armed forces must adhere to the very highest standards of …honourable conduct.

"These are standards which Prince Andrew has fallen well short of.

"We are therefore asking that you take immediate steps to strip Prince Andrew of all his military ranks and titles.

"We understand that he is your son, but we write to you in your capacity as head of state and as Commander-in-Chief of the Army, Navy and Air Force."

Prince Andrew was behind the wheel
(

This week Her Majesty did strip her son of his military titles and royal patronages and said he can no longer use the title His Royal Highness.

Royal expert Duncan Larcombe told OK! that the Queen will be "frustrated" with how the situation has been handled, especially on the year of her Diamond Jubilee.

Mr Larcombe said: "As a mother, this is the stuff of nightmares.

He faces charges in the US
(

He was stripped of his military titles
(

"She has spent so many years building the reputation, and then suddenly it comes out.

"The Epstein thing has been under the surface for a decade, but it’s now exploded.

"It’s one disaster after the other."

The pair married in 1986 and divorced a decade later
(

It has been reported that Sarah Ferguson has no plans to ditch her Duchess title despite Andrew being stripped of his HRH.

Friends of Sarah told the Daily Mail she had held the title of duchess since her divorce from Andrew and “that is how it will stay”.

"Andrew is still the Duke of York, so it is not an issue,” they said.