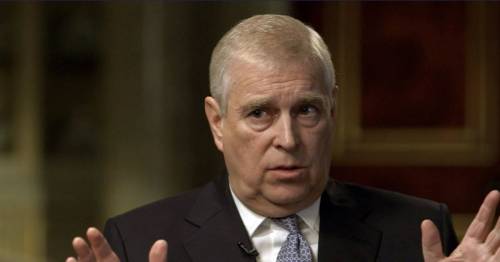 Prince Andrew currently faces serious allegations in a civil case in the US, after a judge ruled on January 12 that the trial would be going ahead.

The Duke of York is up against allegations of sexual abuse brought forward by Virginia Giuffre, but he vehemently denies these claims.

Giuffre alleges that, in 2001, she was sexually abused by Jeffery Epstein's friend Prince Andrew on three separate occasions.

Then known as Virginia Roberts, she would have been 17 at the time.

He is now looking to sell his Swiss ski chalet, worth £17million, to pay for his spiralling legal fees, and has also been stripped of his military titles by the Queen. This means can no longer be referred to as 'His Royal Highness'.

So what are the events that led to the civil case involving Prince Andrew and Virginia Giuffre?

The wedding of Sarah Ferguson and Prince Andrew in 1986
(

Born in 1960, he became the third child of the Queen and Prince Phillip, as well as being the first person born to a reigning British monarch since Princess Beatrice was born to Queen Victoria.

He then trained as a Navy pilot from 1979 and served in the Falklands War three years later.

Thousands lined the street as he married Sarah Ferguson at Westminister Abbey. The happy couple became the Duke and Duchess of York on the same day.

The two divorced in 1996 after separating four years earlier, but remain close to this day.

Andrew is believed to have first met Jeffrey Epstein in 1999 through Ghislaine Maxwell, who was, at one time, Epstein's girlfriend.

Pictures released during the trial of Maxwell revealed that she and Epstein had stayed at Balmoral Castle the very same year.

Andrew later said he saw Epstein "infrequently", adding "probably no more than only once or twice a year".

Prince Andrew is then pictured at an event, attended by Maxwell and Epstein, at Donald Trump's Mar-a-Lago resort in Florida.

Trump later banned Epstein from the property and The Daily Mail reported him saying: "Yes, he and I did have a falling out a long time ago. The reason doesn't make any difference, frankly, but I haven't spoken to him in probably 15 years or more.

'I wasn't a big fan of Jeffrey Epstein, that I can tell you."

In the same year, Virginia Roberts alleges she was approached by Ghislaine Maxwell to train as a masseuse, before being trafficked.

Allegations in the upcoming civil case stem from the year 2001.

Jeffrey Epstein became a convicted paedophile after admitting to having prostituted minors. He was sentenced to 18 months in prison in 2008 and served 13 months.

Two years later, after the shamed financiar served time behind bars for his crimes, Prince Andrew was pictured walking with Epstein in Manhattan on December 5 2010 – an incident Andrew claimed was to cut ties with the billionaire.

After the photos were released, Prince Andrew quit his role as the UK trade envoy in 2011.

Prince Andrew was named in US court documents filed by Giuffre, alleging she was forced to have sex with Andrew when he was 17.

The claims were later struck from the record.

At the time, Buckingham Palace said: "It is emphatically denied that The Duke of York had any form of sexual contact or relationship with Virginia Roberts.

"Any claim to the contrary is false and without foundation."

Jeffrey Epstein was found dead in his cell in August 2019 after being re-arrested and charged with sex trafficking. The New York City medical examiner determined his death was a suicide.

Prince Andrew gave an interview to the BBC's Emily Maitlis in November explaining his reasons why he could not have carried out the allegations made by Giuffre.

He stated that Giuffre's descriptions of him sweating were not accurate as he couldn't sweat due to a medical condition, and that on one of the dates mentioned he was at a Pizza Express in Woking.

He stepped back from royal duties after the car-crash interview.

In January, Andrew failed to get a sexual abuse civil case, brought by Giuffre in New York, thrown out.

The Queen stripped him of his military titles on Thursday January 13, 2022.